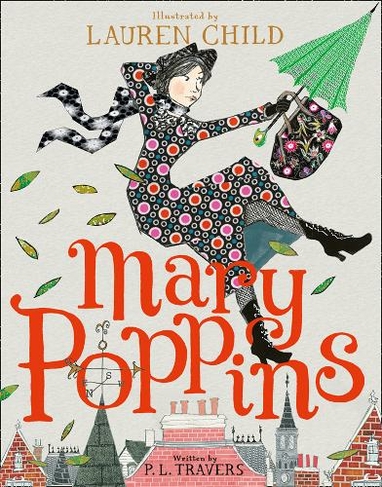 By P. L. Travers (Author), Lauren Child (Illustrator)
Hardback
https://www.whsmith.co.uk/products/mary-poppins-illustrated-gift-edition/p-l-travers/lauren-child/hardback/9780008289362-03-000.html £13.60 rrp £20.00 Save £6.40 (32%)
GBP
Availability
In Stock
Free Delivery Available When You Spend £25 Or More
Details
Spend £25 On Products To Receive Free Standard Delivery To Your Home Or Free Next Working Day Click And Collect To Store

An exquisite flagship gift edition of an iconic classic, illustrated by the current Waterstones Children's Laureate, Lauren Child. When Mary Poppins arrives at their house on a gust of the East Wind and slides up the bannister, Jane and Michael Banks's lives are turned magically upside down. Who better to reimagine this endearing children's classic than today's most instantly recognisable and best-loved artist-illustrator? Lauren Child brings the magic of Mary Poppins into the hearts and imagination of readers and fans new and old. First published in 1934, Mary Poppins has been delighting readers ever since, both in books and on film. This stunning deluxe edition is published ahead of the release of the hotly anticipated Disney film Mary Poppins Returns.

P.L. Travers was born in 1899 in Maryborough in Queensland, Australia and was one of three sisters. She worked as a secretary, a dancer and an actress, but writing was P.L. Travers's real love, and for many years she was a journalist. It was while recuperating from a serious illness that she wrote Mary Poppins - "to while away the days, but also to put down something that had been in my mind for a long time", she said. She recieved an OBE in 1977, and died in 1996. Lauren Child burst onto the children's books scene in 1999 and has since published many bestselling and award-winning books, including those featuring the hugely popular Charlie and Lola, and the Clarice Bean series. She has won numerous awards, including the prestigious Kate Greenaway Medal and the Smarties Gold Award. Lauren is the current Waterstones Children's Laureate.