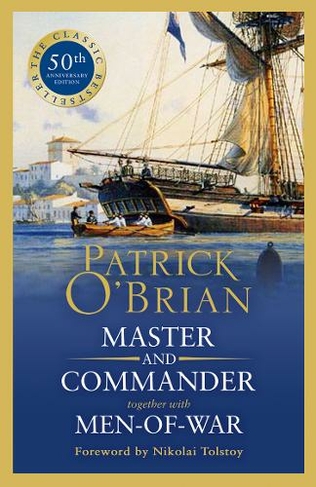 By Patrick O'Brian (Author)
Hardback
https://www.whsmith.co.uk/products/master-and-commander-special-edition-including-bonus-book-menofwar-special-edition/patrick-obrian/hardback/9780008328320-12-000.html £16.00 rrp £20.00 Save £4.00 (20%)
GBP
Availability
In Stock
With Free Standard Delivery To Your Home Or Store
Details
Spend £15 On Eligible Products To Recieve Free Standard Delivery To You Home Or Free Next Working Day Click And Collect To Store
Share

This special hardback edition celebrates the 50th anniversary of first publication with a brand-new foreword by O'Brian's stepson and biographer, Nikolai Tolstoy, and artist's note by Geoff Hunt, and includes the complete text of the previously unavailable Men-of-War, O'Brian's fascinating guide to the world of Aubrey/Maturin. Master and Commander is the first of Patrick O'Brian's now famous Aubrey/Maturin novels, regarded by many as the greatest series of historical novels ever written. It establishes the friendship between Captain Jack Aubrey RN and Stephen Maturin, who becomes his secretive ship's surgeon and an intelligence agent. It contains all the action and excitement which could possibly be hoped for in a historical novel, but it also displays the qualities which have put O'Brian far ahead of any of his competitors: his depiction of the detail of life aboard a Nelsonic man-of-war, of weapons, food, conversation and ambience, of the landscape and of the sea. O'Brian's portrayal of each of these is faultless and the sense of period throughout is acute. His power of characterisation is above all masterly. This brilliant historical novel marked the debut of a writer who has grown into one of the most remarkable literary novelists now writing, the author of what Alan Judd, writing in the Sunday Times, has described as 'the most significant extended story since Anthony Powell's A Dance to the Music of Time'.

Patrick O'Brian, until his death in 2000, was one of our greatest contemporary novelists. He is the author of the acclaimed Aubrey-Maturin tales and the biographer of Joseph Banks and Picasso. He is the author of many other books including Testimonies, and his Collected Short Stories. In 1995 he was the first recipient of the Heywood Hill Prize for a lifetime's contribution to literature. In the same year he was awarded the CBE. In 1997 he received an honorary doctorate of letters from Trinity College, Dublin. He lived for many years in South West France and he died in Dublin in January 2000.