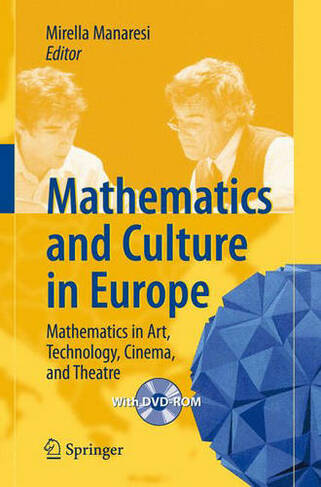 Mathematics and Culture in Europe Mathematics in Art, Technology, Cinema, and Theatre 2007 ed.

Predicated on the notion that mathematics has been a growing source of aesthetic inspiration in culture, this volume celebrates where the two intermesh. It is a meditation on the performances and cultural events, all mathematics-related, performed in Bologna in 2004, is dedicated to all those who are curious about mathematics, but also more generally about theatre, cinema, literature, arts and science. Thanks to the DVD, one can readers can relive various events through the voices and the images of the participants. Contains 1 Paperback / softback and 1 Digital (on physical carrier) 20 black & white tables, biography

Mirella Manaresi is professor of geometry at the Department of Mathematics of the University of Bologna. Her main research field is algebraic geometry, but, since some years, she is also involved in activities to promote the interest for mathematics of the general public. She was editor, with M. Emmer, of the volume Mathematics, art, technology, cinema (Springer Italia, 2002 and Springer 2003, respectively in the Italian and in the extended English edition), and between 2002 and 2005 she has been responsible for a European project, from which this volume takes origin.