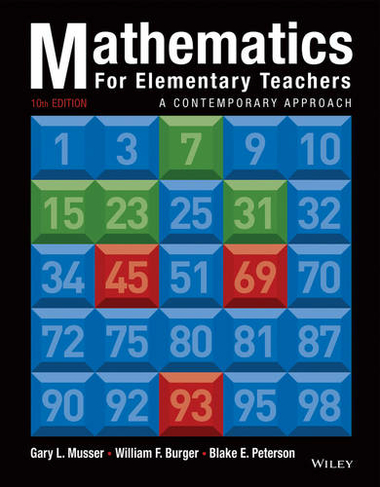 Mathematics for Elementary Teachers, 10th Edition establishes a solid math foundation for future teachers. Thoroughly revised with a clean, engaging design, the new 10th Edition of Musser, Peterson, and Burgers best-selling textbook focuses on one primary goal: helping students develop a deep understanding of mathematical concepts so they can teach with knowledge and confidence. The components in this complete learning program--from the textbook, to the e-Manipulative activities, to the Childrens Videos, to the online problem-solving tools, resource-rich website and Enhanced WileyPLUS--work in harmony to help achieve this goal. WileyPLUS sold separately from text.

Gary L. Musser is Professor Emeritus from Oregon State University. He earned both his B.S. in Mathematics Education in 1961 and his M.S. in Mathematics in 1963 at the University of Michigan and his Ph.D. in Mathematics (Radical Theory) in 1970 at the University of Miami in Florida. He taught at the junior and senior high, junior college and university levels for more than 30 years. He spent his final 24 years teaching prospective teachers in the Department of Mathematics at Oregon State University. While at OSU, Dr. Musser developed the mathematics component of the elementary teacher program. Soon after Professor William F. Burger joined the OSU Department of Mathematics in a similar capacity, the two of them began to write the first edition of this book. Professor Burger passed away during the preparation of the second edition, and Professor Blake E. Peterson was hired at OSU as his replacement. Professor Peterson joined Professor Musser as a coauthor beginning with the fifth edition. Professor Musser has published 40 papers in many journals, including the Pacific Journal of Mathematics, Canadian Journal of Mathematics, The Mathematics Association of America Monthly, the NCTM s The Mathematics Teacher, the NCTM s The Arithmetic Teacher, School Science and Mathematics, The Oregon Mathematics Teacher, and The Computing Teacher. In addition, he is a coauthor of two other college mathematics books: College Geometry A Problem-Solving Approach with Applications (2008) and A Mathematical View of Our World (2007). He also coauthored the K-8 series Mathematics in Action. He has given more than 65 invited lectures/ workshops at a variety of conferences, including NCTM and MAA conferences, and was awarded 15 federal, state, and local grants to improve the teaching of mathematics. While Professor Musser was at OSU, he was awarded the university s prestigious College of Science Carter Award for Teaching. He is currently living in sunny Las Vegas, were he continues to write, ponder the mysteries of the stock market, enjoy living with his wife and his faithful yellow lab, Zoey. Blake E. Peterson is currently a Professor in the Department of Mathematics Education at Brigham Young University. He was born and raised in Logan, Utah, where he graduated from Logan High School. Before completing his BA in secondary mathematics education at Utah State University, he spent two years in Japan as a missionary for The Church of Jesus Christ of Latter Day Saints. After graduation, he took his new wife, Shauna, to southern California, where he taught and coached at Chino High School for two years. In 1988, he began graduate school at Washington State University, where he later completed a M.S. and Ph.D. in pure mathematics. After completing his Ph.D., Dr. Peterson was hired as a mathematics educator in the Department of Mathematics at Oregon State University in Corvallis, Oregon, where he taught for three years. It was at OSU where he met Gary Musser. He has since moved his wife and four children to Provo, Utah, to assume his position at Brigham Young University where he is currently a full professor. Dr. Peterson has published papers in Rocky Mountain Mathematics Journal, The American Mathematical Monthly, The Mathematical Gazette, Mathematics Magazine, The New England Mathematics Journal, School Science and Mathematics, The Journal of Mathematics Teacher Education, and The Journal for Research in Mathematics as well as chapters in several books. He has also published in NCTM s Mathematics Teacher, and Mathematics Teaching in the Middle School. His research interests are teacher education in Japan and productive use of student mathematical thinking during instruction, which is the basis of an NSF grant that he and 3 of his colleagues were recently awarded. In addition to teaching, research, and writing, Dr. Peterson has done consulting for the College Board, founded the Utah Association of Mathematics Teacher Educators, and has been th