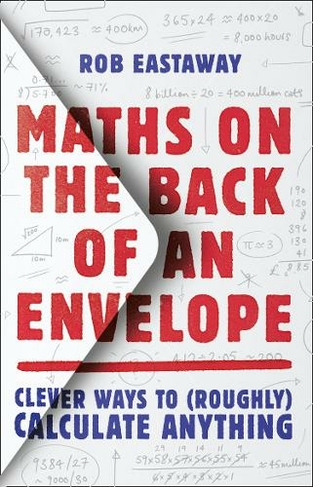 Maths on the Back of an Envelope: Clever Ways to (Roughly) Calculate Anything

By Rob Eastaway (Author)
Hardback
https://www.whsmith.co.uk/products/maths-on-the-back-of-an-envelope-clever-ways-to-roughly-calculate-anything/rob-eastaway/hardback/9780008324582-12-000.html £8.19 rrp £9.99 Save £1.80 (18%)
GBP
Availability
In Stock
Free Delivery Available When You Spend £25 Or More
Details
Spend £25 On Products To Receive Free Standard Delivery To Your Home Or Free Next Working Day Click And Collect To Store
Share

'Another terrific book by Rob Eastaway' SIMON SINGH 'A delightfully accessible guide to how to play with numbers' HANNAH FRY How many cats are there in the world? What's the chance of winning the lottery twice? And just how long does it take to count to a million? Learn how to tackle tricky maths problems with nothing but the back of an envelope, a pencil and some good old-fashioned brain power. Join Rob Eastaway as he takes an entertaining look at how to figure without a calculator. Packed with amusing anecdotes, quizzes, and handy calculation tips for every situation, Maths on the Back of an Envelope is an invaluable introduction to the art of estimation, and a welcome reminder that sometimes our own brain is the best tool we have to deal with numbers.

Rob Eastaway has written or co-written twelve books, including the bestselling Why Do Buses Come in Threes? and Maths for Mums and Dads as well as What Is a Googly?, the acclaimed beginner's guide to cricket. He is the Director of Maths Inspiration, a national programme of theatre-based lecture shows for 15-17 year olds that has reached over 150,000 teenagers since it began in 2004. Rob regularly gives talks to all age groups in primary and secondary schools, appears on BBC Radio 4's current affairs/ numbers programme More or Less, and works closely with National Numeracy, the national charity that campaigns for better adult numeracy. In 2017, Rob received the Zeeman medal for excellence in communication of maths to the general public.