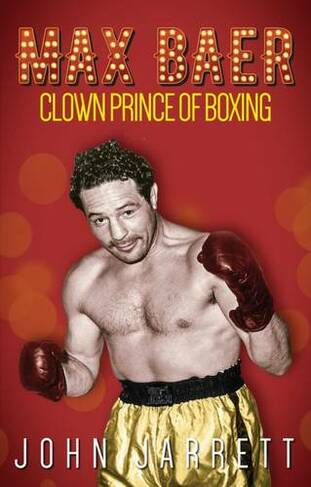 By John Jarrett (Author)
Paperback
https://www.whsmith.co.uk/products/max-baer-clown-prince-of-boxing/john-jarrett/paperback/9781785312960-12-000.html £10.65 rrp £12.99 Save £2.34 (18%)
GBP
Availability
In Stock
Free Delivery Available When You Spend £25 Or More
Details
Spend £25 On Eligible Products To Receive Free Standard Delivery To You Home Or Free Next Working Day Click And Collect To Store
Share

They called Max Baer the 'Clown Prince of Boxing', but trainer Ray Arcel remembered a night in 1933 when he worked Baer's corner in what was probably Max's greatest triumph, the night he smashed Max Schmeling to defeat in ten brutal rounds. That was no clown. A year later, Baer was heavyweight champion of the world. New York loved the handsome Californian. Broadway was his playground and he was never short of playmates; his manager Ancil Hoffman often settling some breach-of-promise suit brought by a leggy blonde showgirl. A natural for Hollywood. Radio and vaudeville engagements brought in $250,000. From a $4 a day foundry worker, Baer's rise was rapid. He bought so many suits he couldn't keep track of them; wore a new hat every week; bought a house like a hotel. Arcel cried like a baby when he read in the New York Times that Max had died from a heart attack in November 1959. Baer was just 50 years old. This is the fascinating story of an iconic boxing figure who achieved so much in a life too short. Includes photo section

John Jarrett is the author of eight boxing books, having written about it since 1951 when his first article was published in the British weekly 'trade paper' Boxing News. He wrote in the paper for 60 years, as well as magazines such as Reveille, Titbits, Weekend, Headlines, Sportsworld, International Boxing, and Boxing Pictorial. He was a regular contributor to the British Boxing Board of Control Yearbook and wrote features for the Evening Chronicle and Journal (Newcastle upon Tyne) and the Evening Gazette (Middlesbrough). In 1978 Jarrett was appointed Northern Area Secretary for the British Boxing Board of Control, a position he still holds today.