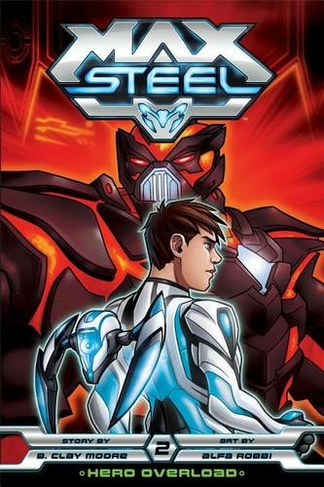 Maxwell McGrath is just your average 16-year-old boy...until he starts experiencing uncontrollable Turbo Energy! To control this superpower, he must merge with a know-it-all alien ultralink named Steel. Together this unlikely duo will battle to save the earth as the ultimate turbocharged superhero - MAX STEEL! All of a sudden Max Steel isn't the only superhero around. Max encounters a trio of superpowered teens with mysterious skills who are in serious need of training. He takes on the task, but can Max get these new heroes up to speed before they have to battle a real threat? One of Max's biggest baddies is waiting in the wings to strike...and Max is going to have to face him with a bunch of noobs! EU Toy Safety Directive - No warning

B. CLAY MOORE has written comic books for virtually every major publisher, including Image Comics, Marvel Comics, DC Comics, WildStorm, Oni Press and Top Cow Productions. He is the co-creator of a handful of critically acclaimed creator-owned books. ALFA ROBBI was born and raised in Semarang City, Central Java, Indonesia. His published works include Planetary Brigade (Boom!) and eV (TokyoPop). Robbi's current focus is Papillon, a comic book art studio he founded with Fajar Buana in 2002. Alfa was the illustrator for Voltron Force: Rise of the Beast King (VIZ Media). ALBERT CARRERES is a graduate of the Joso School of Comic and Visual Arts in Barcelona, Spain. He's worked on several comic and manga series, including the Cars: The Rookie (Boom!), Iron Man: The Video Game special for Sega (Marvel) and Volume 5 of Voltron Force (VIZ Media).