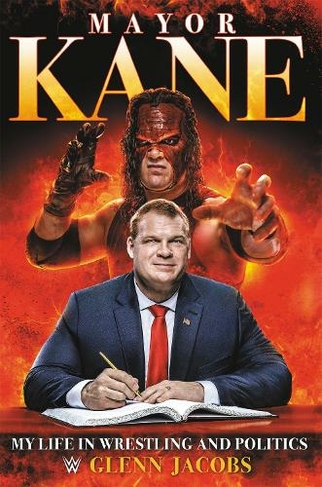 Mayor Kane: My Life in Wrestling and Politics

By Glenn Jacobs (Author)
Hardback
https://www.whsmith.co.uk/products/mayor-kane-my-life-in-wrestling-and-politics/glenn-jacobs/hardback/9781546085843-12-000.html £18.39 rrp £22.99 Save £4.60 (20%)
GBP
Availability
In Stock
Free Delivery Available When You Spend £25 Or More
Details
Spend £25 on eligible products to receive free standard delivery to home or free next working day click and collect to store
Share

Even in his heyday in wrestling, Jacobs was inspired to pursue politics by popular libertarian figures such as former Republican presidential candidate Ron Paul, Republican Senator Rand Paul, Fox News' Judge Andrew Napolitano and others, and that led him to fulfill his own political ambitions. Before becoming Mayor Kane, Glenn "Kane" Jacobs was one of WWE's top Superstars for over two decades and travelled the globe with the likes of "Stone Cold" Steve Austin, Dwayne "The Rock" Johnson, John Cena, Ric Flair, and many others. He dominated the WWE with The Undertaker as the "Brothers of Destruction." Kane reinvented himself with the help of Daniel Bryan forming "Team Hell No." He set "Good ol' JR," Jim Ross on fire. The wrestler-turned-politician hasn't hung up his wrestling boots yet. Politics is a contact sport and Jacobs is using his wrestling skills in that arena. Jacobs supports President Trump and his agenda, and is implementing conservative policies in Tennessee.

Glenn Jacobs is an American semi-retired professional wrestler, businessman, actor, and politician. A libertarian, he is the Mayor of Knox County, Tennessee. In professional wrestling, Jacobs is signed to WWE on the SmackDown brand, where he is known by his ring name Kane. Jacobs is a three-time WWE world champion and a 12-time world tag team champion. He is also a two-time Intercontinental Champion and a Money in the Bank winner as well as the third man to complete WWE's Grand Slam. Jacobs has made numerous guest appearances in film and on television, including the lead role in the 2006 WWE Studios production See No Evil and its 2014 sequel. Jacobs is also a longtime supporter of libertarian political causes. He lives in Knox County, TN.