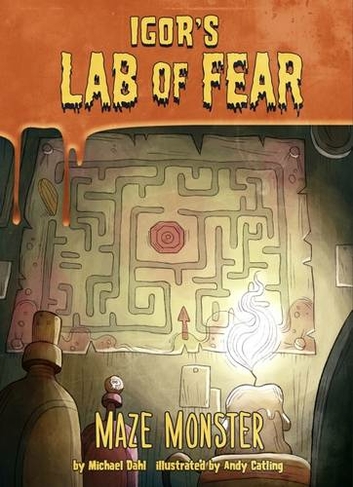 Two friends decide to sneak into an abandoned science laboratory to explore, only to find that the lab isn't empty after all. Strange security guards patrol the grounds. Even stranger, almost all of the doors inside are locked. And they keep hearing an eerie, chattering sound around every corner. When they try to leave, they realize that the place is more like a labyrinth than a laboratory - and like most labyrinths, this maze has a monster waiting at the finish line . . .

Michael Dahl is the prolific author of the bestselling Goodnight, Baseball picture book and more than 200 other books for children and young adults. He has won the AEP Distinguished Achievement Award three times for his nonfiction, a Teacher's Choice award from Learning magazine, and a Seal of Excellence from the Creative Child Awards. And he has won awards for his board books for the earliest learners, Duck Goes Potty and Bear Says "Thank You!" Dahl has written and edited numerous graphic novels for younger readers, authored the Library of Doom adventure series, the Dragonblood books, Trollhunters, and the Hocus Pocus Hotel mystery/comedy series. Dahl has spoken at schools, libraries, and conferences across the US and the UK, including ALA, AASL, IRA, and Renaissance Learning. He currently lives in Minneapolis, Minnesota in a haunted house. Igor Sinkovec was born in Slovenia in 1978. As a kid, he dreamt of becoming a truck driver--or failing that, an astronaut. As it turns out, he got stuck behind a drawing board -- so sometimes he draws semi trucks and space shuttles. Igor makes his living as an illustrator. Most of his work involves illustrating books for kids. He lives in Ljubljana, Slovenia.