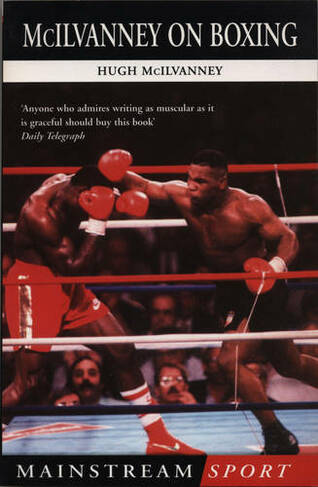 By H McIlvanney (Author), Hugh McIlvanney (Author)
Paperback
https://www.whsmith.co.uk/products/mcilvanney-on-boxing/hugh-mcilvanney/paperback/9781840186055-12-000.html £9.01 rrp £10.99 Save £1.98 (18%)
GBP
Availability
In Stock
Free Delivery Available When You Spend £25 Or More
Details
Spend £25 On Products To Receive Free Standard Delivery To Your Home Or Free Next Working Day Click And Collect To Store
Share

Hugh McIlvanney is a living legend in sports journalism. A regular winner of the fiercely contested UK Sports Writer of the Year award, he also has the unique distinction of being the only sports writer to have been voted Journalist of the Year. He is respected for his incisive commentaries and perceptive analyses of football and racing, but this collection contains the best of his writing on his first great passion, boxing. The book features in-depth analysis of the build-up, climax and aftermath of over 25 showdowns including: Muhammad Ali vs. Henry Cooper (1966) Joe Frazier vs. Muhammad Ali (1971) George Foreman vs. Ken Norton (1974) Eusibio Pedvoza vs. Barry McGuigan (1985) Lloyd Honeyghan vs. Marlon Starling (1989) Mike Tyson vs. Frank Bruno (1989) An essential read for boxing lovers of all ages with writing so vivid that readers will feel like they have a ringside seat.

Hugh McIlvanney is the chief sports writer for the Sunday Times, having previously been associated with the Observer for 30 years. He is widely regarded as the outstanding sports writer of his generation. A regular winner of the UK Sports Writer of the year award, he is the only sports writer to have also won the Journalist of the Year honour.