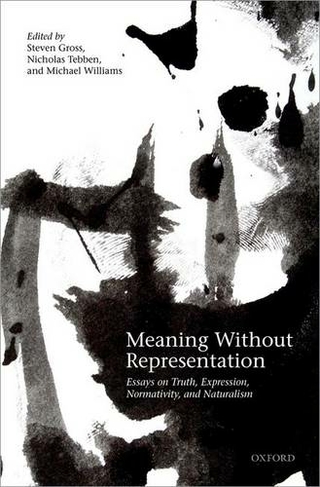 Meaning Without Representation: Essays on Truth, Expression, Normativity, and Naturalism

Much contemporary thinking about language is animated by the idea that the core function of language is to represent how the world is and that therefore the notion of representation should play a fundamental explanatory role in any explanation of language and language use. Leading thinkers in the field explore various ways this idea may be challenged as well as obstacles to developing various forms of anti-representationalism. Particular attention is given to deflationary accounts of truth, the role of language in expressing mental states, and the normative and the natural as they relate to issues of representation. The chapters further various fundamental debates in metaphysics-for example, concerning the question of finding a place for moral properties in a naturalistic world-view-and illuminate the relation of the recent neo-pragmatist revival to the expressivist stream in analytic philosophy of language.

Steven Gross is Associate Professor of Philosophy at Johns Hopkins University, with affiliations as well with the Departments of Cognitive Science and of Psychological and Brain Sciences. He received his PhD in philosophy from Harvard University. Gross has published on a variety of topics in philosophy of language and philosophy of mind, including context-sensitivity, cognitive penetrability, innateness, and the nature of linguistic evidence. His current projectsinclude papers on perceptual consciousness and on temporal representation.Nick Tebben earned his PhD from Johns Hopkins in 2013, and is presently a lecturer in philosophy at Towson University. He specializes in epistemology and the philosophy of language, and his work has appeared in Synthese, among other journals.Michael Williams is a Krieger-Eisenhower Professor in the Department of Philosophy at the Johns Hopkins University and a fellow of the American Academy of Arts and Sciences. His main interests are epistemology, philosophy of language, (both approached from a broadly pragmatist standpoint) and the history of modern philosophy. He is the author of Groundless Belief (1977; 2nd edition 1999), Unnatural Doubts (1992; 2nd edition 1996) and Problems of Knowledge (2001), aswell as numerous articles. He is currently working on a book on different forms of philosophical skepticism with the working title Curious Researches: Reflections on Skepticism Ancient and Modern.