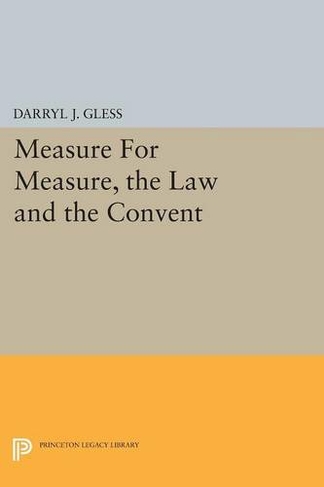 Measure For Measure, the Law and the Convent: (Princeton Legacy Library)

Through careful attention to the contexts of Renaissance culture invoked by the language, action, and visual spectacle in Measure for Measure, Darryl Gless brings a new and original interpretation to one of Shakespeare's most problematic plays. This leads him to a comprehensive and coherent reading of the play that has important implications for further understanding of much of the Shakespearean canon and of other Renaissance works, especially those dealing with theological issues. Originally published in 1979. The Princeton Legacy Library uses the latest print-on-demand technology to again make available previously out-of-print books from the distinguished backlist of Princeton University Press. These editions preserve the original texts of these important books while presenting them in durable paperback and hardcover editions. The goal of the Princeton Legacy Library is to vastly increase access to the rich scholarly heritage found in the thousands of books published by Princeton University Press since its founding in 1905.