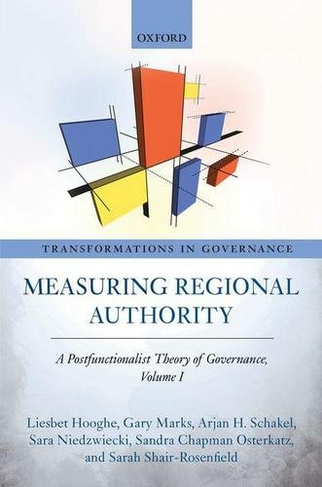 Measuring Regional Authority A Postfunctionalist Theory of Governance, Volume I

This is the first of five ambitious volumes theorizing the structure of governance above and below the central state. This book is written for those interested in the character, causes, and consequences of governance within the state and for social scientists who take measurement seriously. The book sets out a measure of regional authority for 81 countries in North America, Europe, Latin America, Asia, and the Pacific from 1950 to 2010. Subnational authority is exercised by individual regions, and this measure is the first that takes individual regions as the unit of analysis. On the premise that transparency is a fundamental virtue in measurement, the authors chart a new path in laying out their theoretical, conceptual, and scoring decisions before the reader. The book also provides summaries of regional governance in 81 countries for scholars and students alike. Transformations in Governance is a major new academic book series from Oxford University Press. It is designed to accommodate the impressive growth of research in comparative politics, international relations, public policy, federalism, environmental and urban studies concerned with the dispersion of authority from central states up to supranational institutions, down to subnational governments, and side-ways to public-private networks. It brings together work that significantly advances our understanding of the organization, causes, and consequences of multilevel and complex governance. The series is selective, containing annually a small number of books of exceptionally high quality by leading and emerging scholars. The series targets mainly single-authored or co-authored work, but it is pluralistic in terms of disciplinary specialization, research design, method, and geographical scope. Case studies as well as comparative studies, historical as well as contemporary studies, and studies with a national, regional, or international focus are all central to its aims. Authors use qualitative, quantitative, formal modeling, or mixed methods. A trade mark of the books is that they combine scholarly rigour with readable prose and an attractive production style. The series is edited by Liesbet Hooghe and Gary Marks of the University of North Carolina, Chapel Hill, and the VU Amsterdam, and Walter Mattli of the University of Oxford.

Liesbet Hooghe is the W.R. Kenan Distinguished Professor of Political Science at the University of North Carolina, Chapel Hill, and Chair in Multilevel Governance at the VU University Amsterdam. Her interests lie in European integration, multilevel governance, decentralization, international organization, elite studies, and public opinion. Recent books include The European Commission in the 21st Century (OUP, 2013), The Rise of Regional Authority(Routledge, 2010), The Commission and The Integration of Europe (CUP, 2002), and Multilevel Governance and European integration (Rowman & Littlefield, 2001). She is co-editor of the series, Transformations in Governance, with OUP.Gary Marks is Burton Craige Professor of Political Science at UNC-Chapel Hill, and holds the Chair in Multilevel Governance at the VU, Amsterdam. In 2010 he was awarded a Humboldt Forschungspreis (Humboldt Research Prize) for his contributions to Political Science, and was recipient of an Advanced European Research Council Grant (2010-2015). Marks has published widely in the leading journals of Political Science and Sociology. His (co-)authored books include i Multi-Level Governance andEuropean Integrationr (2001), i It Didn't Happen Here: Why Socialism Failed in the United Statesr (2003), European Integration and Political Conflict (2004), and The Rise of Regional Authority: A Comparative Study of 42 OECD Democracies (2010). He is co-editor of the series, Transformations inGovernance, with OUP.Arjan H. Schakel is Assistant Professor in Research Methods at Maastricht University. His research interests include federalism, multilevel governance, regional elections, and regional parties and his work has appeared in journals such as Comparative Political Studies, European Journal of Political Research, Party Politics, Regional Studies, and West European Politics. He is co-author of the book The Rise of Regional Authority(Routledge, 2010) and co-editor of the book Regional and National Elections in Western Europe (Palgrave Macmillan, 2013).Sandra Chapman Osterkatz is a Visiting Research Fellow, at the VU University of Amsterdam. Her work has been published by Oxford University Press, the Journal of international Affairs, Latin American Politics and Society, the International Institute of Democracy and Electoral Assistance, and Elkarri (Spain). Her research focuses on poverty, inequality, and social policy in multilevel polities.Sara Niedzwiecki is an Assistant Professor of Political Science at the University of New Mexico. Her work on the politics of social policy and on multilevel governance has been published by Oxford University Press, Latin American Politics and Society, Journal of Politics in Latin America, International Political Science Review, and editorials in Brazil, Germany, and Spain.Sarah Shair-Rosenfield is an Assistant Professor of Political Science at Arizona State University. Her research focuses on political institutions, electoral and party systems, female political representation, political decentralization, and executive-legislative relations in Southeast Asia and Latin America. Her work has been published in Electoral Studies, Political Research Quarterly, the Journal of Politics in Latin America and the Journal of East AsianStudies.