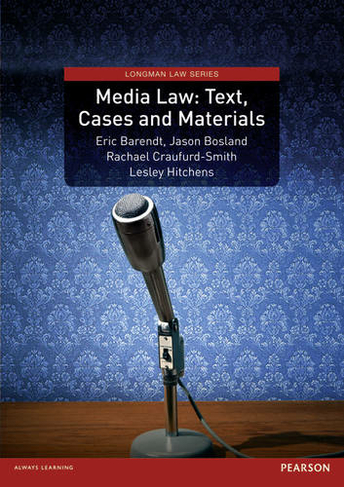 This book stands out from others on media law by emphasising the increasingly important regulatory and European aspects, and focussing less on more traditional common law topics. The authors take a comparative approach, using material from the USA and Commonwealth jurisdictions, as well as looking at relevant aspects of Human Rights law. The commentary is comprehensive and critical, introducing you to the wide range of technical and policy questions which are posed in the field of media law.

Eric Barendt has been Goodman Professor of Media Law at UCL since 1990; it was the first chair in media law in the whole of the UK. Previously he taught at St Catherine's College, Oxford University for twenty years and has been Visiting Professor at Universities throughout Europe and Australia. As such he is probably the most eminent media law academic in the UK and has written a wealth of academic monographs, articles and book chapters. From 2009 he will be the editor of a new journal published by Hart, Media and Communication Law Review. He is a fantastic author for the series and for a textbook as lecturers respect his opinion and are keen to know what he has to say on a subject while his commitment to teaching ensures that he is used to presenting media law to the first time student. Lesley Hitchens is Professor of Law and Associate Dean at the University of Technology Sydney (UTS) having held previous posts at top Universities in the UK and in Australia along side a career as a professional commercial lawyer. Like Barendt, she has authored widely and is a leading academic in the field highlighted by her membership on the editorial boards of Journal of Information Law and Technology and Communications Law Bulletin. Rachael Craufurd-Smith is a Senior Lecturer at the University of Edinburgh where she specialises in media, the regulation of culture and European Union law. She is also a qualified solicitor and has worked for the public broadcasting sector. She currently heads the University of Edinburgh team working on a research project (MEDIADEM) to support free and independent media in the EU.