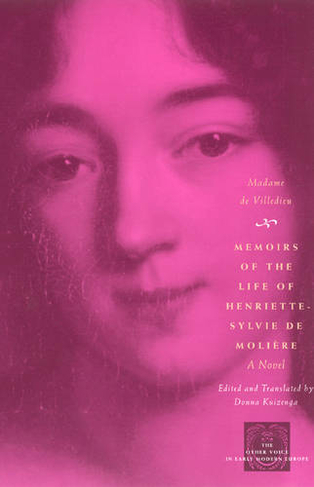 Memoirs of the Life of Henriette-Sylvie De Moliere A Novel 2nd ed.

Known as Madame de Villedieu, Marie-Catherine Desjardins (1640-83) was a prolific writer who played an important role in the evolution of the early modern French novel. One of the earliest women to write for a living, she defied cultural convention by becoming an innovator and appealing to popular tastes through fiction, drama, and poetry. Memoirs of the Life of Henriette-Sylvie de Moliere, a semi-autobiographical novel, portrays an enterprising woman who writes the story of her life, a complex tale that runs counter to social expectations and romantic conventions. A most striking work, the novel skillfully mixes real events from the author's lifetime with entirely fictional adventures. At a time when few women published, Villedieu's Memoirs is a significant achievement in creating a voice for the early modern woman writer. Written while the French novel form was still in its infancy, it should be welcomed by any scholar of women's writing or of the early development of the novel. maps

Donna Kuizenga is professor of Romance languages at the University of Vermont and associate dean of the College of Arts and Sciences. She is the author of Narrative Strategies in La Princesse de Cleves.