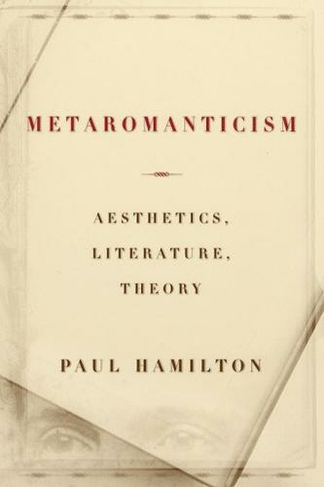 Paul Hamilton here redefines romanticism in terms of its philosophical habits of self-consciousness. According to Hamilton, metaromanticism, or the ways in which writers of the romantic period generalized their own practices, was fundamentally characteristic of the romantic project itself. Through bracing analyses of the aesthetics of Friedrich Schiller and Jean-Jacques Rousseau, and key works by Samuel Taylor Coleridge, Percy and Mary Shelley, John Keats, Sir Walter Scott, and Jane Austen, Hamilton shows how the romantic movement's struggle with its own tenets was not an effort to seek an alternative way of thought, but instead a way of becoming what it already was. And yet, as Hamilton reveals, the romanticists were still not content with their own self-consciousness. Pushed to the limits, such contemplation either manifested itself as self-disgust or forced romanticists to search for a discourse outside of aesthetics. Adding greater clarity to our understanding of romanticism and shedding much-needed light on the commerce between English writers and philosophers in Germany and France, this study should be valuable to students of literature, aesthetics and critical theory.

Paul Hamilton is a professor of English in the School of English and Drama at Queen Mary, University of London. He is the author of "Coleridge's Poetics," "Wordsworth," "Historicism," and "Percy Bysshe Shelley."