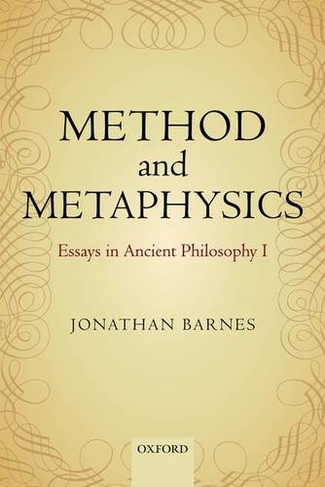 Method and Metaphysics Essays in Ancient Philosophy I

Method and Metaphysics presents twenty-six essays in ancient philosophy by Jonathan Barnes, one of the most admired and influential scholars of his generation. The essays span four decades of his career, and are drawn from a wide variety of sources: many of them will be relatively unknown even to specialists in ancient philosophy. Several essays are now translated from the original French and made available in English for the first time; others have been substantially revised for republication. The volume opens with eight essays about the interpretation of ancient philosophical texts, and about the relationship between philosophy and its history. The next five essays examine the methods of ancient philosophers. The third section comprises thirteen essays about metaphysical topics, from the Presocratics to the late Platonists. This collection will be a rich feast for students and scholars of ancient philosophy.

Jonathan Barnes was educated at the City of London School and at Balliol College. For 25 years he taught at Oxford, being a Fellow first of Oriel and then of Balliol. He then spent eight years at the University of Geneva, before becoming Professor of Ancient Philosophy at the Sorbonne. He is a Fellow of the British Academy, and of the American Academy of Arts and Sciences. His many publications include The Ontological Argument (Macmillan, 1972); Aristotle's PosteriorAnalytics (Clarendon Press, 2nd edition 1993); Aristotle (OUP, 1982); The Complete Works of Aristotle (Princeton UP, 1984); and Truth, etc. (Clarendon Press, 2007); with J. Annas, The Modes of Scepticism (CUP, 1985); Early Greek Philosophy (Penguin, 1987); The Toils of Scepticism (CUP, 1990); TheCambridge Companion to Aristotle (CUP, 1995); and Porphyry: Introduction (Clarendon Press, 2003). He lives in France.