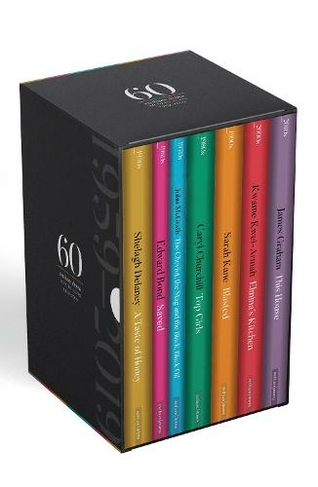 Methuen Drama's iconic Modern Plays series began in 1959 with the publication of Shelagh Delaney's A Taste of Honey and has grown over six decades to now include more than 1000 plays by some of the best writers from around the world. This new limited-edition hardback box set of seven plays celebrates the 60th anniversary of the Modern Plays series and features a play from each decade from 1959 to 2019. Starting with Shelagh Delaney's A Taste of Honey, the six other plays were chosen by public vote from a shortlist of plays from each decade. The resulting collection tells a unique story of British theatre from a period of restriction and censorship through to a period of radical retaliation against the status quo and norms of theatrical storytelling. The box set brings together first plays by remarkable women, the first Black British voice in London's West End, often-revived classics, student favourites and contemporary Olivier Award nominees to offer a diverse picture of British playwriting. Methuen Drama's Modern Plays series has been at the heart of British theatre for the past 60 years and looks forward to publishing landmark plays of future decades. Published in a limited-edition box set, this special celebratory set includes the following plays: A Taste of Honey by Shelagh Delaney (1959) Saved by Edward Bond (1960s) The Cheviot, The Stag and the Black, Black Oil by John McGrath (1970s) Top Girls by Caryl Churchill (1980s) Blasted by Sarah Kane (1990s) Elmina's Kitchen by Kwame Kwei-Armah (2000s) This House by James Graham (2010s) Contains 7 Hardbacks

Shelagh Delaney was born in Salford, Lancashire. She is most well-known for A Taste of Honey, for which she won the Foyle's New Play Award and the New York Drama Critics' Circle Award. She wrote the screenplay for the film version with Tony Richardson and was awarded the British Film Academy Award and the Robert Flaherty Award. Her other screenplays include The White Bus and Charley Bubbles, for which she won the Writers' Guild Award. She has also written for television and radio and has had a collection of short stories published. She died in 2011.Edward Bond is regarded as one of the UK's greatest and most influential playwrights. His plays include The Pope's Wedding (Royal Court Theatre, 1962), Saved (Royal Court, 1965), Early Morning (Royal Court, 1968), Lear (Royal Court, 1971), The Sea (Royal Court, 1973), The Fool (Royal Court, 1975), The Woman (National Theatre, 1978), Restoration (Royal Court, 1981) and The War Plays (RSC at the Barbican Pit, 1985).John McGrath was born in Birkenhead, Cheshire, in 1935. In 1971, together with Elizabeth MacLennan, he co-founded the 7:84 Theatre Company, which divided into Scottish and English companies in 1973 with McGrath remaining as Artistic Director of both. During his career McGrath wrote over 60 plays, including Fish in the Sea(1972), The Cheviot, the Stag and the Black, Black Oil (1973), Blood Red Roses (1980), Border Warfare (1989), Watching for Dolphins (1992) and, most recently, HyperLynx (2001). He was twice Visiting Fellow in Theatre at Cambridge University. His previous books include A Good Night Out (1981), The Bone Won't Break (1990) and Six Pack: Plays for Scotland (1996). He received Lifetime Achievement Awards from both BAFTA (in 1993) and the Writers' Guild of Great Britain (in 1997), as well as Honorary Doctorates from the University of Stirling and the University of London. He died in 2002.Caryl Churchill is an award-winning playwright, whose plays are renowned for their striking influence upon contemporary British theatre practices. Indicative of her enduring impression upon the theatrical landscape, Churchill has won Obie Awards for her widely celebrated plays Cloud 9 (1979), Top Girls(1982), Serious Money (1987) and A Number (2002). Further cementing her reputation as an outstanding playwright, in 2002 Churchill won an Obie Award for Lifetime Achievement and in 2010 was placed in the American Theatre Hall of Fame. She continues to produce innovative and provocative work, such as Seven Jewish Children - a play for Gaza (2009) and Love and Information (2012), and in January 2016 her latest full-length play, Escaped Alone, opened at the Royal Court Theatre to great acclaim. With an illustrious theatre career that transcends four decades, Caryl Churchill is arguably more than just one of Britain's most revered female playwrights; she is one of Britain's most respected and groundbreaking working today. Sarah Kane was born in 1971. Her first play, Blasted, was produced at the Royal Court Theatre Upstairs in 1995. Her second play, Phaedra's Love, was produced at the Gate Theatre in 1996. In April 1998, Cleansed was produced at the Royal Court Theatre Downstairs, and in September 1998, Cravewas produced by Paines Plough and Bright Ltd at the Traverse Theatre, Edinburgh. Her last play, 4.48 Psychosis, premiered at the Royal Court Jerwood Theatre Upstairs in June 2000. Her short film, Skin, produced by British Screen/Channel Four, premiered in June 1997. Sarah Kane died in 1999, and is now recognised as one of the most influential voices in modern European theatre.Kwame Kwei-Armah won the Peggy Ramsay award for his first play, Bitter Herb (1998), which was subsequently put on by the Bristol Old Vic, where he also became writer-in-residence. He followed this up with the musical Blues Brother, Soul Sister which toured the UK in 2001. He co-wrote the musical Big Nose (an adaptation of Cyrano de Bergerac) which was performed at the Belgrade Theatre, Coventry, in 1999. In 2003