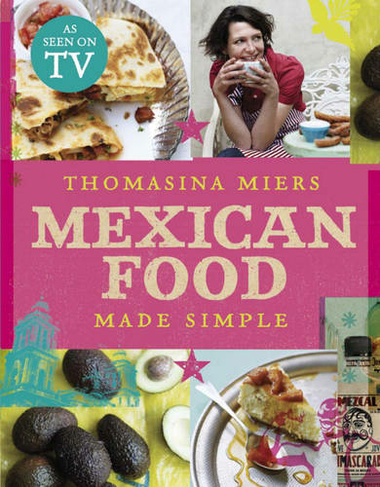 If you love having friends and family round for dinner or simply rustling up fresh, fast food, Mexican cooking is fun, fantastic and full of flavour. One of its brightest stars, Wahaca chef and food writer Thomasina Miers shares the recipes she has gathered since she first fell in love with the country aged 18, reinventing the classics with accessible ingredients to demonstrate how exciting and delicious traditional Mexican food can be. Whether you're looking for street snacks full of punch, rich, hearty stews, or sensational, spicy wraps, Thomasina's Mexican Food Made Simple is bursting with recipes you'll want to eat and share: soft corn tacos and tostados; little cheesy things (quesadillas); a great Mexican chille con carne; Grilled Seabass or succulent Lamb Chops with homemade salsas and tortilla chips; and to finish churros with chocolate sauce. The book features vibrant food photography throughout, and step-by-step guides to folding the perfect burrito, eating a taco (no knives and forks allowed), making a sizzling table salsa, and much more. And with Thomasina's guide to the world's hottest chillies, ingenious cheats, and helpful menu planner, Mexican Food Made Simple has everything you need to put together a fantastic Mexican feast at home. Full Colour Throughout

When Thomasina Miers first arrived in Mexico aged eighteen, she fell so in love with its food that she went back to live there, opening up a cocktail bar in Mexico City and using her free time to travel the country and cook with some of Mexico's top chefs. After returning to London and winning BBC2's MasterChef in 2005, Thomasina opened the Mexican street food cantina, Wahaca, which won the Observer Food Monthly's 'best cheap eats' award, and has now opened three branches. She writes a regular recipe column in the Times and is co-editor of Soup Kitchen (2005) and the author of Cook (2006) and Wild Gourmets (2007).