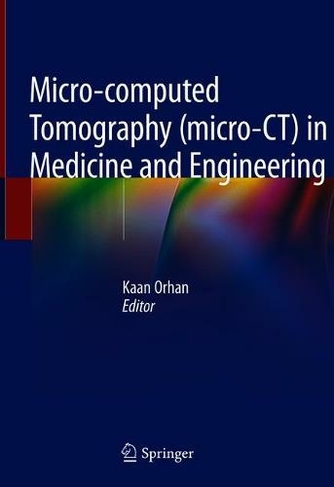 This book focuses on applications of micro CT, CBCT and CT in medicine and engineering, comprehensively explaining the basic principles of these techniques in detail, and describing their increasing use in the imaging field. It particularly highlights the scanning procedure, which represents the most crucial step in micro CT, and discusses in detail the reconstruction process and the artifacts related to the scanning processes, as well as the imaging software used in analysis. Written by international experts, the book illustrates the application of micro CT in different areas, such as dentistry, medicine, tissue engineering, aerospace engineering, geology, material engineering, civil engineering and additive manufacturing. Covering different areas of application, the book is of interest not only to specialists in the respective fields, but also to broader audience of professionals working in the fields of imaging and analysis, as well as to students of the different disciplines. 169 Tables, color; 172 Illustrations, color; 40 Illustrations, black and white; XII, 312 p. 212 illus., 172 illus. in color.

Kaan Orhan, DDS MSc MHM PhD, BBAc is a Professor of Dentomaxillofacial Radiology at the Faculty of Dentistry, Ankara University, Turkey and a Visiting Professor at the OMFS-IMPATH Research Group, Department of Imaging and Pathology, University of Leuven, Belgium.Dr Orhan received his degree in 1998 and completed his PhD and maxillofacial radiology residency studies in 2002 at the Osaka University Faculty of Dentistry in Osaka, Japan and Ankara University, Faculty of Dentistry. In 2004, he began his academic career at Ankara University as a consultant at the Faculty of Dentistry. He became an associate professor in 2006 and a full-time professor in 2012. From 2007 to 2010, he was the founder and chairman of the Dentomaxillofacial Radiology Department, Near East University, Cyprus.He served as chairman of the Research and Scientific Committee, European Academy of DentoMaxillofacial Radiology from 2008 to 2012, and later as Vice-President (2012-2014) and President. He is a fellow of the Japanese Board of DentoMaxillofacial Radiology, European Head and Neck Radiology Society (ESHNR), European Society of Magnetic Resonance in Medicine and Biology (ESRMB), and Turkish Magnetic Resonance Society.Dr Orhan is an editor for several journals, including "Radiology: Open Access" and "Oral Radiology", and a reviewer for more than 50 different journals in his field. He has authored / coauthored eight books in English and Turkish, as well as over 200 SCI international publications in peer-reviewed journals. His research interests include CT, CBCT, MRI, ultrasonography (USG), head & neck radiology, and particularly Micro-CT.