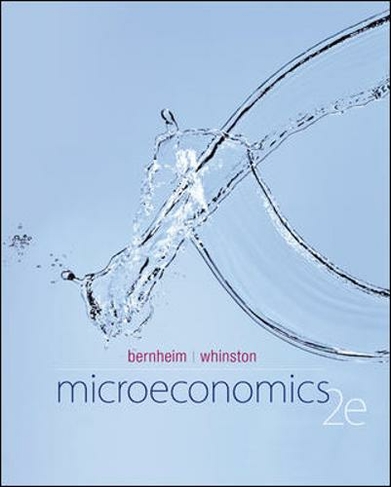 Bernheim and Whinston's Microeconomics 2nd edition is uniquely designed to appeal to a variety of student learning styles. The content focuses on core principles of the intermediate microeconomics course: individuals and firms making decisions, competitive markets, and market failures, and is delivered in a combination of print, digital, and mobile formats appropriate for today's learner. McGraw-Hill's adaptive learning component, LearnSmart, provides assignable modules that help students master core concepts in each chapter. Scan codes within the chapters give students mobile access to online resources including videos on how to solve In-Text Exercises. Extensive end-of-chapter material provides flexible options for both calculus and algebra-based courses. Bernheim and Whinston's completely integrated and accessible learning experience teaches students to apply and engage with a wide range of quantitative problems for more success in the intermediate microeconomics course. 350 Illustrations, unspecified

B. Douglas Bernheim graduated with an A.B. in Economics from Harvard University, summa cum laude and Phi Beta Kappa, in 1979. He entered graduate study at M.I.T. under a National Science Foundation Graduate Fellowship and completed his Ph.D. three years later. He began his academic career at Stanford University and taught there from 1982 to 1987. He left Stanford in 1988 to assume an endowed chair in the Department of Finance at Northwestern Universitys J.L. Kellogg Graduate School of Management. In 1990 he moved to Princeton University, where he held an endowed chair in the Department of Economics and also served as the co-director of the Center for Economic Policy Studies. He returned to Stanford in 1994 and is now the Edward Ames Edmonds Professor of Economics. Professor Bernheims work has spanned a number of fields, including public economics, political economy, game theory, contract theory, behavioural economics, industrial organization, and financial economics. He is a research associate of the National Bureau of Economic Research, a Senior Fellow of the Stanford Institute for Economic Policy Research (SIEPR), and co-director of SIEPRs Tax and Budget Policy Program. He is also a former director of the Stanford Institute for Theoretical Economics and co-editor of the American Economic Review. Professor Bernheims teaching has included principles of economics, intermediate microeconomics, public economics, microeconomic theory, industrial organization, behavioural economics, and insurance and risk management. Michael D. Whinston is the Robert E. and Emily H. King Professor of Business Institutions in the Department of Economics at Northwestern University. He also holds appointments at Northwesterns School of Law and its Kellogg Graduate School of Management. Whinston received his B.S. and M.B.A. from the Wharton School at the University of Pennsylvania and his Ph.D. from M.I.T. He taught at Harvard from 1984 to 1997 before moving to Northwestern. His research has covered a variety of topics in microeconomics, including game theory, the design of contracts and organizations, fi rm behaviour in oligopolistic markets, antitrust, and law and economics. He has also conducted empirical research on the airline and pharmaceutical industries, and served as a consultantfor private parties, the government, and the courtsin various antitrust cases. Whinston is a co-author of the leading graduate textbook in microeconomics, Microeconomic Theory (Oxford University Press, 1995), and is also the author of Lectures on Antitrust Economics (MIT Press, 2006). He and Bernheim have collaborated since 1983, and are excited about this opportunity to produce an innovative new microeconomics text for undergraduates.