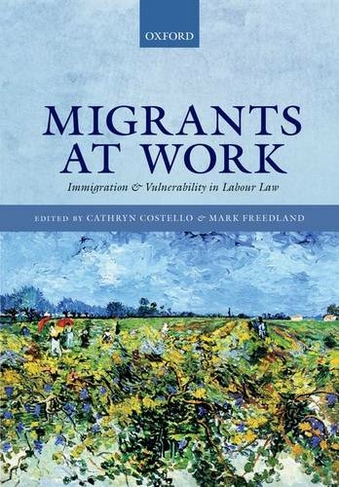 Migrants at Work Immigration and Vulnerability in Labour Law

Also available on eBook for £84.23. Click here to purchase from Rakuten Kobo

There is a highly significant and under-considered intersection and interaction between migration law and labour law. Labour lawyers have tended to regard migration law as generally speaking outside their purview, and migration lawyers have somewhat similarly tended to neglect labour law. The culmination of a collaborative project on 'Migrants at Work' funded by the John Fell Fund, the Society of Legal Scholars, and the Research Centre at St John's College, Oxford, this volume brings together distinguished legal and migration scholars to examine the impact of migration law on labour rights and how the regulation of migration increasingly impacts upon employment and labour relations. Examining and clarifying the interactions between migration, migration law, and labour law, contributors to the volume identify the many ways that migration law, as currently designed, divides the objectives of labour law, privileging concerns about the labour supply and demand over worker-protective concerns. In addition, migration law creates particular forms of status, which affect employment relations, thereby dividing the subjects of labour law. Chapters cover the labour laws of the UK, Australia, Ireland, Israel, Italy, Germany, Sweden, and the US. References are also made to discrete practices in Brazil, France, Greece, New Zealand, Mexico, Poland, and South Africa. These countries all host migrants and have developed systems of migration law reflecting very different trajectories. Some are traditional countries of immigration and settlement migration, while others have traditionally been countries of emigration but now import many workers. There are, nonetheless, common features in their immigration law which have a profound impact on labour law, for instance in their shared contemporary shift to using temporary labour migration programmes. Further chapters examine EU and international law on migration, labour rights, human rights, and human trafficking and smuggling, developing cross-jurisdictional and multi-level perspectives. Written by leading scholars of labour law, migration law, and migration studies, this book provides a diverse and multidisciplinary approach to this field of legal interaction, of interest to academics, policymakers, legal practitioners, trade unions, and migrants' groups alike.

Cathryn Costello is Andrew W. Mellon Associate Professor in International Human Rights and Refugee Law, at the Refugee Studies Centre, Oxford, with a fellowship at St Antony's College. From 2003-2013, she was Francis Reynolds Fellow & Tutor in EU & Public Law at Worcester College, Oxford, during which time she also and completed her DPhil studies on EU asylum and immigration law. She began her academic career at the Law School, Trinity College Dublin, andfrom 2000-2003, she also held the position of Director of the Irish Centre for European Law. Cathryn has published widely on many aspects of EU and human rights law, including asylum and refugee law, immigration, EU Citizenship and third country national family members, family reunification, and immigrationdetention. Her monograph on the Human Rights of Migrants in European Law will be published in OUP in 2014.Mark Freedland is a Research Fellow of the Oxford Institute of European and Comparative Law, an Emeritus Research Fellow of St John's College, Oxford, and an Honorary Professor in the Law Faculty of University College London. He is also a Fellow of the British Academy, a Bencher of Gray's Inn, and an Honorary Queen's Counsel. He was first initiated into labour law (or 'Industrial Law' as it was then called) as an undergraduate student of Professor Roger Rideout, at UCL, in 1963-66. Followingpostgraduate studies at the University of Oxford (under the tutelage of Sir Otto Kahn-Freund) he went on to become one of the Law Tutors of St John's College, and a Reader in the Oxford Law Faculty with the title of Professor, his research and writing being in the fields of Labour Law and PublicLaw.