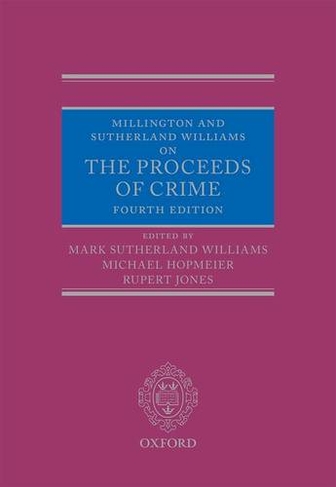 Millington and Sutherland Williams on The Proceeds of Crime: (4th Revised edition)

Also available on eBook for £180.71. Click here to purchase from Rakuten Kobo

Millington and Sutherland Williams on The Proceeds of Crime provides a definitive guide to all aspects of the law concerning the recovery of the proceeds of crime in England and Wales. It provides an easily navigable step-by-step approach that considers how the legislation is geared to ensuring that criminals do not benefit from their crimes financially, as well as detailed coverage of every stage of the confiscation process. This new edition has been fully updated to include all important legislative changes over the last three years, and covers all significant case law, including discussion on R v Waya The new edition incorporates in-depth coverage of the relevant legislation, with analysis of the Proceeds of Crime Act 2002 and reference to case law under both the Drug Trafficking Act 1994 and the Criminal Justice Act 1988, as well as the most recent amendments under the Crime and Courts Act 2013. The new edition contains carefully selected appendices, including extracts from the Proceeds of Crime Act 2002, and draft restraint, receivership and civil recovery orders.

Mark Sutherland Williams is a Judge of the First-Tier Tribunal based at Southampton. He was previously a barrister at 3PB, where he appeared as counsel in a number of the most significant cases decided in the proceeds of crime field, and was head of the Asset Forfeiture Group for 10 years.HHJ Michael Hopmeier is a Circuit Judge based at Kingston Crown Court. He was previously a barrister at Hardwicke Chambers and 23 Essex Street and, during a 30 year career at the Bar, undertook many high-profile fraud cases, both prosecuting and defending.Rupert Jones is a barrister at The Chambers of Ian Lawrie QC, 3 Paper Buildings. He was called to the Bar in 2000 and specialises in the field of asset forfeiture and proceeds of crime.