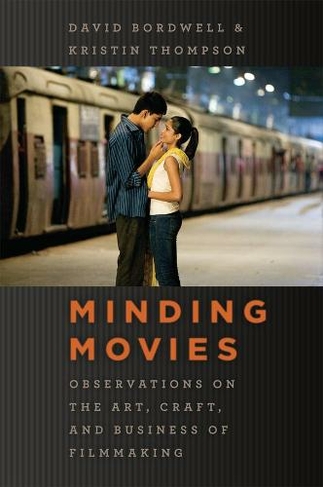 Minding Movies: Observations on the Art, Craft, and Business of Filmmaking

David Bordwell and Kristin Thompson are two of America's preeminent film scholars. You would be hard pressed to find a serious student of the cinema who hasn't spent at least a few hours huddled with their seminal introduction to the field - Film Art, now in its ninth edition - or a cable television junkie unaware that the Independent Film Channel sagely christened them the 'Critics of the Naughts.' Since launching their blog, Observations on Film Art, in 2006, the two have added web virtuosos to their growing list of accolades, creating unconventional long-form pieces engaged with film artistry that have helped to redefine cinematic storytelling for a new age and audience. "Minding Movies" presents a selection from over three hundred essays on genre movies, art films, animation, and the business of Hollywood that have graced Bordwell and Thompson's blog. Informal pieces, conversational in tone but grounded in three decades of authoritative research, the essays gathered here range from in-depth analyses of individual films such as Slumdog Millionaire and Inglourious Basterds to adjustments of Hollywood media claims and forays into cinematic humor. For Bordwell and Thompson, the most fruitful place to begin is how movies are made, how they work, and how they work on us. Written for film lovers, these essays - on topics ranging from Borat to blockbusters and back again - will delight current fans and gain new enthusiasts. Serious but not solemn, vibrantly informative without condescension, and above all illuminating reading, "Minding Movies" offers ideas sure to set film lovers thinking-and keep them returning to the silver screen. 75 halftones

David Bordwell is the Jacques Ledoux Professor of Film Studies Emeritus, and Kristin Thompson is an honorary fellow in the Department of Communication, both at the University of Wisconsin-Madison. Together, they are the authors of Film Art: An Introduction and Film History: An Introduction, in addition to several books written individually. Their blog, Observations on Film Art, can be found at http://www.davidbordwell.net/blog.