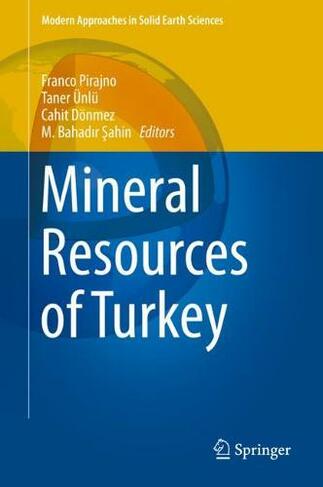 This book furnishes detailed information about Turkey's existing mineral resources, besides providing concepts and ideas which may help the search for potential mineral resources in the future. It is a first book in the English-language international literature on mineral resources of Turkey and it is aimed at economic geologists, mining engineers, and mining investors, as well as graduate and undergraduate students. This work focuses mainly on a range of mineral systems and related geological features throughout Turkey. Taking into account the lack of international literature on these resources, a considerable portion of the book explains the geological context of the region and the settings in which the mineral resources occur. The genetic characteristics of these mineral resources are emphasized and important information is also presented on their economic aspects. All chapter contributions are prepared by researchers and professional geologists. 253 Illustrations, color; 73 Illustrations, black and white; XIV, 749 p. 326 illus., 253 illus. in color.

Franco Pirajno is an internationally recognized expert on mineral systems, with more than 50 years of experience, in industry, academia and government. He has extensive knowledge in tectonics, ore deposit geology in: Europe, southern Africa, South East Asia, New Zealand, southwest Pacific, China, southern Siberia, Greenland and Australia. He is the author of four books, co-authored a book and a monograph on mineral deposits and has published more than 200 peer-reviewed papers, 20 peer-reviewed geological maps. Supervised and/or reviewed 62 MSc and PhD theses; and is the author of 68 unpublished company reports. Nominated highest cited author by Thomson-Reuter for 2011 in Economic Geology at The University of Western Australia. Adjunct Professor at Centre for Exploration Targeting (University of Western Australia) and at the Institute of Mineral Resources of the Chinese Academy of Geological Science, Beijing, China. Honorary Professor, China University of Geosciences, Beijing, China. Research Associate at the Australian Centre for Astrobiology, University of New South Wales, Sydney. Honorary Research Fellow at CERCAMS (Centre for Russian and Central EurAsian Mineral Studies), Natural History Museum, London. Currently on the Editorial Board of the Australian Journal of Earth Sciences; Russian Geology & Geophysics and Gondwana Research. Appointed Editor-in-Chief of Ore Geology Reviews in May 2012 and Series Editor of Modern Approaches in Solid Earth Sciences (Springer) in November 2012. Taner UEnlu started his career working on the iron deposits of Malatya-Hekimhan-Kuluncak Basin at the General Directorate of Mineral Research at Exploration (MTA) in 1974. He completed his PhD at the Technical University of Berlin, Institute of Ore Deposits, between 1978 and 1983. He has conducted scientific studies on genetic modeling of the iron deposits of the Divrigi region between 1984 and 1985 at the University of Copenhagen, Denmark. He worked as the technical coordinator of the Turkey-Denmark joint project at the MTA in 1986. Between 1989 and 2016 he worked as a faculty member at Ankara University, Department of Geology, and he has been the Founding President of the Turkish Iron Working Group which conducts scientific research on the introduction and developments of iron deposits in Turkey since 2005. He was also the coordinator of the MTA Project entitled "Development of the iron deposits of Central Anatolia Region and Malatya-Hekimhan- Kuluncak Basin", which are the most important iron ore provinces of Turkey. During his scientific and academic career, Dr UEnlu published several articles on the origin of iron deposits in Turkey, especially on the deposits of the Divrigi and Hekimhan basins. He presented his work at various conferences, and he has been the editor of two books in the field of ore deposits, both of which have been translated into Turkish. He is currently the Editor in Chief of the Bulletin of the Mineral Research and Exploration.Cahit Doenmez graduated from Firat University (Turkey) in 1998, completed his master degree in geology from Cukurova University (Turkey) in 2006 and is currently preparing his PhD Thesis on Economic Geology at the same university. He started to work at the Department of Mineral Research and Exploration of the General Directorate of Mineral Research and Exploration (MTA) in 2004, where is now Head of the Department. He is also Head of the Editorial Board of MTA. Throughout the years he worked at many exploration projects especially on ophiolite related mineral deposits around Turkey. He published papers on chromite deposits and VMS type deposits in national and international journals. He worked as a Unit Manager between 2012 and 2016 and as the Director of the Natural History Museum between 2016 and 2017. M. Bahadir Sahin graduated from Hacettepe University (Turkey) in 1988, where he also obtained his master degree in mineralogy and petrography in 1991 and his PhD in Metamorphic Petrology in 1999.