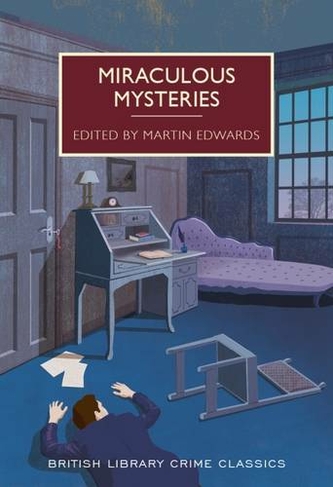 By Martin Edwards (Contributor)
Paperback
https://www.whsmith.co.uk/products/miraculous-mysteries-lockedroom-murders-and-impossible-crimes/martin-edwards/paperback/9780712356732-12-000.html £7.37 rrp £8.99 Save £1.62 (18%)
GBP
Availability
In Stock
Free Delivery Available When You Spend £25 Or More
Details
Spend £25 On Products To Receive Free Standard Delivery To Your Home Or Free Next Working Day Click And Collect To Store

Locked-room mysteries and other impossible crime stories have been relished by puzzle-lovers ever since the invention of detective fiction. Fiendishly intricate cases were particularly well suited to the cerebral type of detective story that became so popular during the 'golden age of murder' between the two world wars. But the tradition goes back to the days of Wilkie Collins, and impossible crime stories have been written by such luminaries as Arthur Conan Doyle, G.K. Chesterton, Dorothy L. Sayers and Margery Allingham. This anthology celebrates their work, alongside long-hidden gems by less familiar writers. Together these stories demonstrate the range and high accomplishment of the classic British impossible crime story over more than half a century.

Martin Edwards is an award-winning crime writer best known for two series of crime novels set in Liverpool and the Lake District. He is series consultant for British Library Crime Classics and the editor of six previous anthologies in the series, as well as being Vice Chair of the Crime Writers' Association and President of the Detection Club. The Golden Age of Murder, his study of the Detection Club, has won several awards since its publication in 2015.