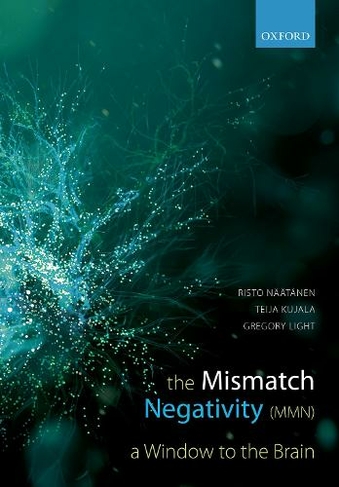 Mismatch Negativity: A Window to the Brain

Also available on eBook for £40.79. Click here to purchase from Rakuten Kobo

Mismatch negativity (MMN) is the electrophysiological change-detection response of the brain. MMN is stimulated when there is any discernible change to a repetitive sequence of sound, occurring even in the absence of attention. MMN is an automatic response and causes an involuntary attentional shift, representing a function which is of vital significance. A parallel response can also be detected in the other sensory modalities- visual, somatosensory, and olfactory. MMN occurs in different species, and across the different developmental stages, from infancy to old age. Importantly, the MMN response is affected in different cognitive brain disorders, providing an index to the severity of the disorder and consequently, a guide to the effectiveness of different treatments. MMN has become extremely popular around the world for investigating a wide range of clinical populations. It is a versatile tool for studying perception, memory, and learning functions in both the healthy and dysfunctional brain. Furthermore, being elicited irrespective of attention, it is ideal for investigating inattentive participants, such as sleeping infants or patients in a coma, whose cognitive processes are otherwise hard to access. Written by pioneers and leading authorities in the subject, this book provides an introduction to MMN and its contribution within different clinical fields: developmental disorders, neurological disorders, psychiatric disorders, and aging.

Risto Naatanen is currently Professor of Neurosciences in the University of Tartu, Estonia. He obtained his PhD in psychology at the University of Helsinki, Finland, in 1968, where he was Professor of Psychology from 1975-1998 and Academy Professor of the Academy of Finland from 1983-2007. In 2008-2017 he was Visiting Professor of the Center of Functionally Integrative Neuroscience (CFIN), University of Aarhus, Denmark. ProfessorNaatanen received his training in cognitive neuroscience in the laboratories of Professor Donald B. Lindsley from 1965-1966, preparing his doctoral thesis there.Teija Kujala is currently Professor of Psychology at the University of Helsinki, Finland. She obtained her PhD in psychology in 1997 from the University of Helsinki where she was a Professor of Cognitive Neuroscience and its Clinical and Educational Applications from 2007-2011, and Professor of Brain, Learning and Education from 2011-2014. Professor Kujala is Director of Cognitive Brain Research Unit (CBRU) and the Chair of the Research Infrastructure Platform Cognitive BrainLaboratory. Her current interests involve the neural basis of language, plasticity, and language-learning deficits and their amelioration.Gregory Light is a Professor in the Department of Psychiatry at the University of California, San Diego (UCSD). He obtained his PhD in psychology in 2001 at UCSD. Dr Light serves as the Deputy Vice Chair of Education and Training for the Department and is also the Director of Mental Health Research and the Director of the Mental Illness, Research, Education and Clinical Center (MIRECC) at the VA San Diego Healthcare System. His work focuses on using translational EEG biomarkersto improve the understanding and treatments of cognitive impairments in neuropsychiatric disorders.