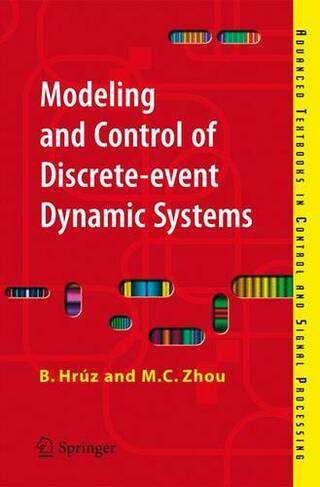 Modeling and Control of Discrete-event Dynamic Systems with Petri Nets and Other Tools 2007 ed.

Discrete-event dynamic systems (DEDs) permeate our world. They are of great importance in modern manufacturing processes, transportation and various forms of computer and communications networking. This book begins with the mathematical basics required for the study of DEDs and moves on to present various tools used in their modeling and control. Industrial examples illustrate the concepts and methods discussed, making this book an invaluable aid for students embarking on further courses in control, manufacturing engineering or computer studies. 40 Tables, black and white; 209 Illustrations, black and white; XX, 342 p. 209 illus.

Branislav Hruz received his Ph.D. from the Slovak Academy of Sciences, Institute of Technical Cybernetics in Bratislava, in 1968. He joined the Research Institute of Mathematical Machines in Prague in 1960 and then the Institute of Technical Cybernetics of the Slovak Academy of Sciences, Bratislava, Slovak Republic, in 1963, and then the State Forest Products Research Institute in Bratislava, Control Engineering Laboratory, in 1971, where he led the first projects of computer automation of the woodworking industry in the former Czechoslovakia. Since 1991 he has been an Associate Professor at the Slovak University of Technology, a member of Faculty of Electrical Engineering and Information Technology, vice-head of Department of Automatic Control Systems. His main interests are in modeling and control of complex systems (especially those of a discrete-event nature), threshold logic functions, finite automata, Petri nets, control methods applied in manufacturing, and instruments and tools for the computer programming of control in practical applications. Dr. Hruz is author or co-author of 100+ publications including three books and he has presented over fifty papers at national or international conferences. He has served as a member of programming or organizing committees of many international conferences. He acted as a visiting Professor at the Vienna University in Austria and he has lectured (by invitation) in Finland, Germany, USA, and France.MengChu Zhou received his Ph.D. from Rensselaer Polytechnic Institute. He joined New Jersey Institute of Technology (NJIT) in 1990, and is currently a Professor of Electrical and Computer Engineering and Director of the Discrete-Event Systems Laboratory. His interests are in computer-integrated systems, Petri nets, networks, and manufacturing. He has 200+ publications including six books and 80+ journal papers. He is Managing Editor of IEEE Transactions on Systems, Man and Cybernetics (SMC), Associate Editor of IEEE Transactions on Automation Science and Engineering, and Editor-in-Chief of International Journal of Intelligent Control and Systems. He has served as General and Program Chair of many international conferences. Dr. Zhou has led or participated in twenty-eight research and education projects with total budget over $10M, funded by the National Science Foundation, (US) Department of Defense, and industry. He was the recipient of the CIM University-LEAD Award from the Society of Manufacturing Engineers, the Perlis Research Award by NJIT, the Humboldt Research Award for US Senior Scientists, and is a Distinguished Lecturer of IEEE SMC Society. He has been invited to lecture in Australia, Canada, China, France, Germany, Hong Kong, Italy, Japan, Korea, Mexico, Taiwan, and US. He was founding chair of Discrete Event Systems Technical Committee of IEEE SMC Society, and a Co-Chair (founding) of the Semiconductor Factory Automation Technical Committee of the IEEE Robotics and Automation Society. He is a life member of the Chinese Association for Science and Technology-USA and served as its President in 1999. He is Fellow of IEEE .