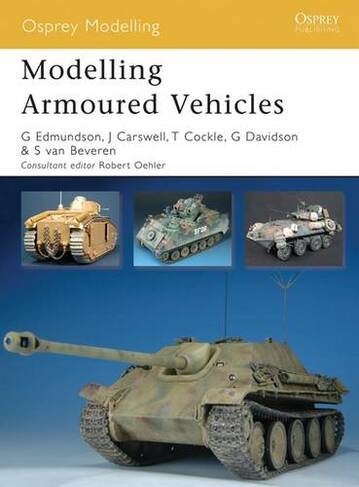 Designed to appeal to all armour modellers from the beginner to the veteran this book details all the steps involved in creating a realistic and attractive model armoured vehicle. Each chapter is illustrated with a range of models covering the whole spectrum of armour modelling, including World War II armour as well as more modern subjects. The authors also cover techniques and subject areas in which they individually excel, highlighting the different tools and approaches required for each individual discipline. Lavishly illustrated with over 250 images, this book contains all the detailed, step-by-step information you need to become an expert armour modeller. Illustrations, color

Gary Edmundson was born in Sunderland in 1956. At the age of ten he emigrated with his family to Canada. He is currently settled in Fort Saskatchewan, working in the chemical industry as an analyzer technician. An interest in military aviation led to building military models for a hobby and Gary is now a regular contributor to military modeling magazines. Steven van Beveren has had a lifelong interest in all things military that has led him to serve as a reservist in the Calgary Highlanders for a number of years. This interest in the military also led him to start building military models at an early age. Over the years, he has been a member of several different model clubs, participated in model shows and written several articles. He lives in Alberta, Canada.Graeme Davidson is a serving officer in the Canadian Army and has been an active modeler for over 20 years. His work has recently been published in Military Modelling magazine and he is a regular contributor to the Missing-Lynx galleries. He lives in New Brunswick.