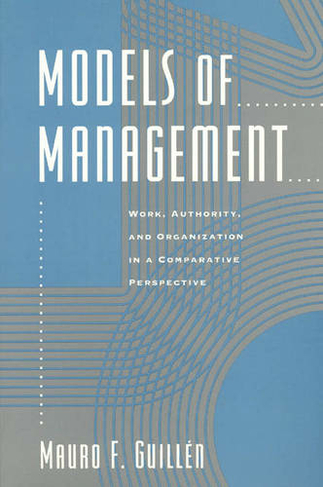 Models of Management Work, Authority and Organization in a Comparative Perspective

In this book, Mauro F. Guillen explores differing historical patterns in the adoption of the three major models of organizational management: scientific management; human relations; and structural analysis. Moving beyond Reinhard Bendix's "Work and Authority", "Models of Management" takes a fresh look at how managers have used these models in four countries during the 20th century. Guillen's study of two liberal-democratic societies (the United States and Great Britain) and two corporatist societies (Germany and Spain) reveals significant differences in the way managerial elites and firms have adopted the three models. His data show that ideas themselves - independent of material interests and technology - can cause organizational change. Throughout the book, contrasts between modernist-technocratic and liberal-humanist mentalities, as well as between Protestant and Catholic religious backgrounds, emerge as decisive factors in determining managerial ideology and practice. In addition to analyzing management methods in organizations, Guillen explores larger issues: the interaction among managerial, government and labour elites; the impact of the state and the professions on managerial behaviour; and the role that managers play in modern societies. This book won the Marvin B. Sussman Prize, Yale University and the President's Book Award, Social Science History Association. 3 line drawings, 21 tables