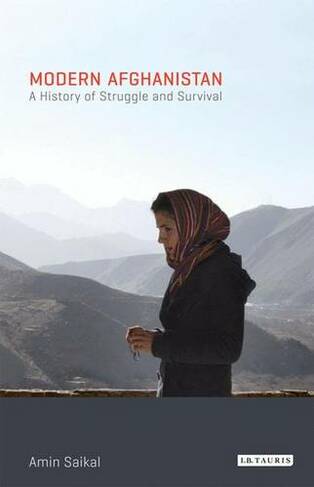 Modern Afghanistan: A History of Struggle and Survival (Revised edition)

Afghanistan's recent history is a sad one: Soviet invasion in 1979; Pakistan-backed internal conflict in the 1980s; the Taliban regime; and then the US invasion and the multi-national occupation after the events of 11 September 2001. Why does Afghanistan remain so vulnerable to domestic instability, foreign intervention and ideological extremism? In reconstructing the tempestuous narrative of modern Afghanistan, Amin Saikal provides a sweeping new understanding of its troubled past and present. He identifies the country's inability to develop stable political structures as stemming from the inter-dynastic rivalry (complicated by polygamy) that scarred successive royal families from the end of the eighteenth century until the pro-Soviet Communist coup of April 1978, all exacerbated by foreign interventions - feeding on fragile domestic structures - and the rise and fall of different ideological streams. Here, for the first time, is an up-to-date analysis of the era of the Taliban's rule, the effects of US domination in the country and attempts to negotiate a US withdrawal - including talks about talks with the Taliban themselves. This book, which sets the crisis of Afghanistan in the context of the country's modern history and social structures, makes a major and highly original contribution towards a better and more nuanced understanding of this ill-fated land. It is the definitive study of Afghanistan and its troubles in national, regional and international contexts from 1747 to the present day. 1 map

Amin Saikal is Director of the Centre for Arab and Islamic Studies and Professor of Political Science at the Australian National University. He has been a visiting fellow at the Universities of Princeton and Cambridge, as well as at Sussex University's Institute of Development Studies. He has also been a Rockefeller Foundation Fellow in International Relations. He is the author of numerous works on the Middle East, Central Asia and Russia, including Islam and the West: Conflict or Cooperation? (2003); The Rise and Fall of the Shah: Iran from Autocracy to Religious Rule (2009) and States of Crisis: Afghanistan, Pakistan, Iraq and Iran (forthcoming, I.B.Tauris).