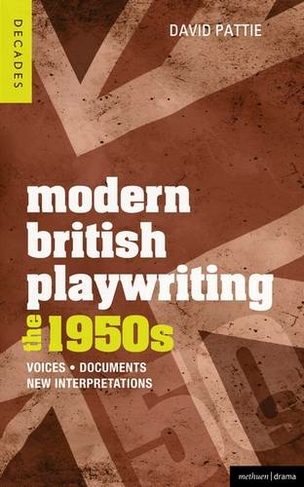 Essential for students of theatre studies, Methuen Drama's Decades of Modern British Playwriting series provides a comprehensive survey and study of the theatre produced in each decade from the 1950s to 2009 in six volumes. Each volume features a critical analysis and reevaluation of the work of four key playwrights from that decade authored by a team of experts, together with an extensive commentary on the period . Modern British Playwriting: The 1950s provides an authoritative and stimulating reassessment of the theatre of the decade together with a detailed study of the work of T.S Eliot (by Sarah Bay-Cheng) , Terence Rattigan (David Pattie), John Osborne (Luc Gilleman) and Arnold Wesker (John Bull). The volume sets the context by providing a chronological survey of the 1950s, a period when Britain was changing rapidly and the very fabric of an apparently stable society seemed to be under threat. It explores the crisis in the theatrical climate and activity in the first part of the decade and the shift as the theatre began to document the unease in society, before documenting the early life of the four principal playwrights studied in the volume. Four scholars provide detailed examinations of the playwrights' work during the decade, combining an analysis of their plays with a study of other material such as early play drafts, interviews and the critical receptions of the time. An Afterword reviews what the writers went on to do and provides a summary evaluation of their contribution to British theatre from the perspective of the twenty-first century.