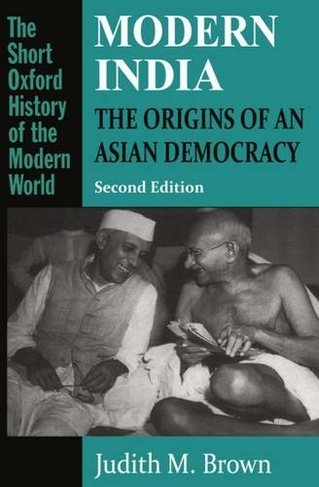 This second edition of this widely used text covers the last two centuries of Indian history, concluding with an epilogue written from the perspective of the 1990s. It thematically and analytically discusses the emergence of India as one of the world's largest democracies and one of the most stable of the states to emerge from the experience of colonialism. The foundations of this rare phenomenon in either Asia or Africa are seen in India's society, the ideas and beliefs of her people, and the institutions of government and politics which have developed on the subcontinent, in a process of interaction between what was indigenous to India and the many external influences brought to bear on the country by economic, political, and ideological contact with the Western world. Modern scholarship has shown how diverse and complex was India's socio-economic and political development; and this theme runs through the study which eschews any simple understanding of India's political development as a clash between `imperialism' and 'nationalism', or the making of a new nation. The complexity reflects many of the continuing ambiguities and inequalities in the subcontinent's life and suggests why the structures of the state, and indeed the very nature of the Indian nation, are now being questioned, often with unprecedented public violence. India's dilemmas are not hers alone: they also raise economic, political, and social issues of profound significance throughout the contemporary world. 2 line figures, 2 maps, tables

Judith Brown is the author of Winds of Change (OUP, 1991), and of Men and Gods in a Changing World: Some Themes in the Religious Experience of 20th-Century Hindus and Christians (1980).