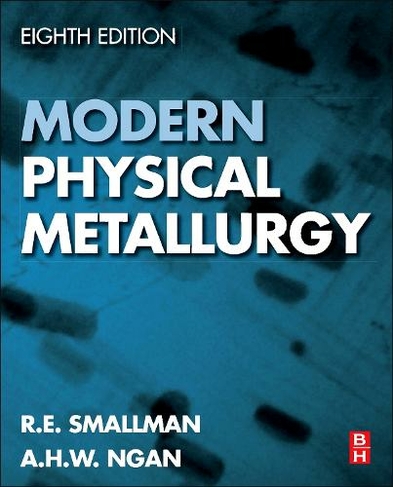 Modern Physical Metallurgy describes, in a very readable form, the fundamental principles of physical metallurgy and the basic techniques for assessing microstructure. This book enables you to understand the properties and applications of metals and alloys at a deeper level than that provided in an introductory materials course. The eighth edition of this classic text has been updated to provide a balanced coverage of properties, characterization, phase transformations, crystal structure, and corrosion not available in other texts, and includes updated illustrations along with extensive new real-world examples and homework problems. Approx. 370 illustrations; Illustrations, unspecified

After gaining his PhD in 1953, Professor Smallman spent five years at the Atomic Energy ResearchEstablishment at Harwell before returning to the University of Birmingham, where he became Professorof Physical Metallurgy in 1964 and Feeney Professor and Head of the Department of PhysicalMetallurgy and Science of Materials in 1969. He subsequently became Head of the amalgamatedDepartment of Metallurgy and Materials (1981), Dean of the Faculty of Science and Engineering, andthe first Dean of the newly created Engineering Faculty in 1985. For five years he wasVice-Principalof the University (1987-92).He has held visiting professorship appointments at the University of Stanford, Berkeley, Pennsylvania(USA), New SouthWales (Australia), Hong Kong and Cape Town, and has received HonoraryDoctorates from the University of Novi Sad (Yugoslavia), University ofWales and Cranfield University.His research work has been recognized by the award of the Sir George Beilby Gold Medal of theRoyal Institute of Chemistry and Institute of Metals (1969), the Rosenhain Medal of the Institute ofMetals for contributions to Physical Metallurgy (1972), the Platinum Medal, the premier medal ofthe Institute of Materials (1989), and the Acta Materialia Gold Medal (2004).Hewas elected a Fellowof the Royal Society (1986), a Fellowof the RoyalAcademy of Engineering(1990), a Foreign Associate of the United States National Academy of Engineering (2005), andappointed a Commander of the British Empire (CBE) in 1992. A former Council Member of theScience and Engineering Research Council, he has been Vice-President of the Institute of Materialsand President of the Federated European Materials Societies. Since retirement he has been academicconsultant for a number of institutions both in the UK and overseas. Professor Ngan obtained his PhD on electron microscopy of intermetallics in 1992 at the Universityof Birmingham, under the supervision of Professor Ray Smallman and Professor Ian Jones. He thencarried out postdoctoral research at Oxford University on materials simulations under the supervisionof Professor David Pettifor. In 1993, he returned to the University of Hong Kong as a Lecturer inMaterials Science and Solid Mechanics, at the Department of Mechanical Engineering. In 2003,he became Senior Lecturer and in 2006 Professor. His research interests include dislocation theory,electron microscopy of materials and, more recently, nanomechanics. He has published over 120refereed papers, mostly in international journals. He received a number of awards, including theWilliamson Prize (for being the top Engineering student in his undergraduate studies at the Universityof Hong Kong), Thomas Turner Research Prize (for the quality of his PhD thesis at the University ofBirmingham), Outstanding Young Researcher Award at the University of Hong Kong, and in 2007was awarded the Rosenhain Medal of the Institute of Materials, Minerals and Mining. He also heldvisiting professorship appointments at Nanjing University and the Central Iron and Steel ResearchInstitute in Beijing, and in 2003, he was also awarded the Universitas 21 Fellowship to visit theUniversity of Auckland. He is active in conference organization and journal editorial work.