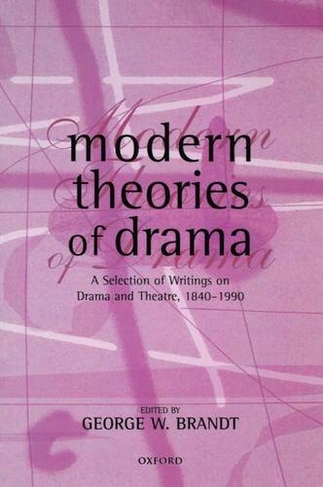 Modern Theories of Drama: A Selection of Writings on Drama and Theatre, 1850-1990

Modern Theories of Drama concentrates on the developments in dramatic theory over the last 150 years, providing a crucial resource for students of drama and theatre studies. From Aristotle's Poetics onwards, drama - especially 'serious' drama - has been encased in a framework of theory, although the more popular forms of theatre have often chosen to ignore this. However, from the eighteenth century until the present day, theoretical questioning of the 'rules' (Aristotelian and other) has constantly grown in scope and strength. This attack was to become more and more vigorous in the second half of the nineteenth century and reach gale force in the twentieth. Different audience profiles and new performance venues; innovative methods of presentation; a changing sense of the purposes of drama and of its philosophical content, have resulted in the striking instability of theory which confronts us today. Quite new concepts have arisen in this century, seemingly outdated ones have been resurrected.