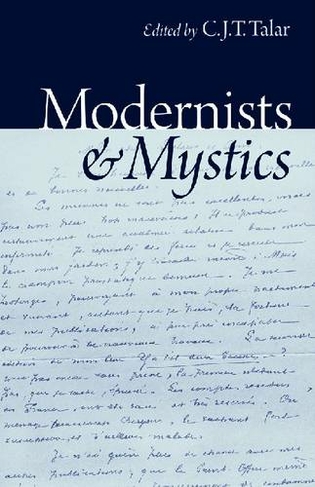 By C. J. T. Talar (Contributor)
Hardback
https://www.whsmith.co.uk/products/modernists-and-mystics/c-j-t-talar/hardback/9780813217093-01-000.html £56.95
GBP
Availability
Currently unavailable. We don't know when or if this item will be back in stock
Share

Though the figures associated with the Modernist crisis in Roman Catholicism are normally viewed as looking forward in terms of critical history and philosophy, they also looked back in history to the church's mystical tradition. ""Modernists and Mystics"" is the first book to tell the story of the Modernist turn to the mystical. It focuses on four diverse modernist-era figures - Friedrich von Hugel, Maurice Blondel, Henri Bremond, and Alfred Loisy - and explores their understanding of mysticism and their relationship to mystics. In the six original essays included in this volume, the authors discuss how von Hugel, Blondel, Bremond, and Loisy all found inspiration in the great mystics of the past. These figures drew inspiration from Fenelon, seeing parallels between the Quietist controversy in which he was deeply involved and the crisis affecting Catholicism in their own day. For them, the reaction against Quietism represented the beginning of a definitive narrowing and suffocating of Catholicism as a living religious tradition. This constriction and hyper-intellectualization of the tradition culminated in the established neoscholasticism of late nineteenth and early twentieth-century manuals of theology. These Modernists opposed the marginalization of the 'mystical element' in religion as well as the consequences that followed from it, and they argued for the restoration of the mystical in the Catholicism of their own time. ""Modernists and Mystics"" also locates these theologians in the larger debates within Catholicism and within the secular academy. Albert Houtin's approach to mysticism in his biography of Cecile Bruyere of Solesmes represents a reductive reading of the phenomenon, indebted to the theories of J.M. Charcot. Loisy's debate with Henri Bergson in the 1930s provides a sense of how mysticism was viewed in the French University. Both von Hugel and Bremond contributed to the widening of Catholic horizons regarding the prevalence and nature of mystical experience, while Blondel contributed the perspective of a Catholic philosopher. The contributions of these figures enrich our understanding of debates over mysticism in the early twentieth century as well as our appreciation of the complexity of the Modernist movement.

C. J. T. TALAR is professor of systematic theology at the University of Saint Thomas. He was co-convener of the Roman Catholic Modernism Seminar (1995-1999) and has worked on John Henry Newman and modern French Catholicism. He is coauthor, with Harvey Hill and Louise-Pierre Sardella, of By Those Who Knew Them: French Modernists Left, Right, and Center, and his chapter on Marcel Hebert appears in David G. Schultenover's The Reception of Pragmatism in France and the Rise of Roman Catholic Modernism, 1890-1914, both published by the Catholic University of America Press.