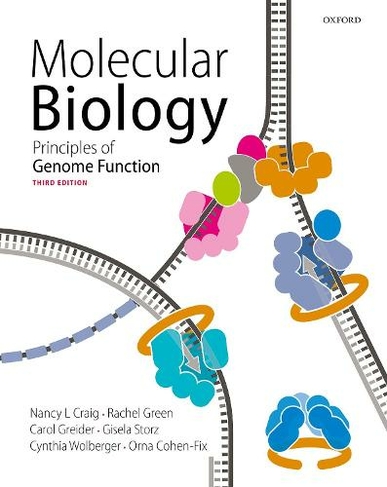 The biological world operates on a multitude of scales - from molecules to cells to tissues to organisms to ecosystems. Throughout all these levels runs a common thread: the communication and onward passage of information - from cell to cell, from organism to organism and, ultimately, from generation to generation. But how does this information - no more than a static repository of data - come alive to govern the processes that constitute life? The answer lies in the concerted action of molecular components which cooperate through a series of carefully-regulated processes to bring the information in our genome to life. These components and processes lie at the heart of one of the most fascinating subjects to engage the minds of scientists today: molecular biology. Molecular Biology: Principles of Genome Function offers a fresh, distinctive approach to the teaching of molecular biology. It is an approach that reflects the challenge of teaching a subject that is in many ways unrecognizable from the molecular biology of the 20th century - a discipline in which our understanding has advanced immeasurably, but about which many questions remain to be answered. It is written with several guiding themes in mind: - A focus on key principles provides a robust conceptual framework on which students can build a solid understanding of the discipline; - An emphasis on the commonalities that exist between the three kingdoms of life, and the discussion of differences between the three kingdoms where such differences offer instructive insights into molecular processes and components, gives students an accurate depiction of our current understanding of the conserved nature of molecular biology, and the differences that underpin biological diversity; - An integrated approach demonstrates how certain molecular phenomena have diverse impacts on genome function by presenting them as themes that recur throughout the book, rather than as artificially separated topics At heart, molecular biology is an experimental science, and a central element to the understanding of molecular biology is an appreciation of the approaches taken to yield the information from which concepts and principles are deduced. Yet there is also the challenge of introducing the experimental evidence in a way that students can readily comprehend. Molecular Biology responds to this challenge with Experimental Approach panels, which branch off from the text in a clearly-signposted way. These panels describe pieces of research that have been undertaken, and which have been particularly valuable in elucidating different aspects of molecular biology. Each panel is carefully cross-referenced to the discussion of key molecular biology tools and techniques, which are presented in a dedicated chapter at the end of the book. Beyond this, Molecular Biology further enriches the learning experience with full-colour, custom-drawn artwork; end-of-chapter questions and summaries; relevant suggested further readings grouped by topic; and an extensive glossary of key terms. Among the students being taught today are the molecular biologists of tomorrow; these individuals will be in a position to ask fascinating questions about fields whose complexity and sophistication become more apparent with each year that passes. Molecular Biology: Principles of Genome Function is the perfect introduction to this challenging, dynamic, but ultimately fascinating discipline.