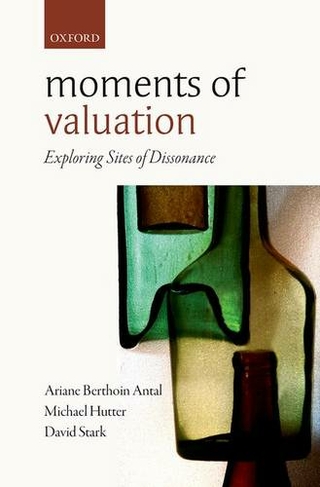 The outcome of innovation processes are determined by complex, historically grown valuation practices. In this book, a wide range of innovations are taken into consideration, from small inventions like entertainment novelties to large societal changes through new technologies. The chapters observe the particular local or distributed sites in which their episodes of innovation take place, and they identify the initial dissonance among those judging a newly proposed alternative. The emphasis of the inquiry, however, is on the practices of valuation that are at work when something succeeds in being "new". The authors represent a wide variety of sub-disciplines and national backgrounds in the social sciences. They share an interest in social valuation and a pragmatist approach. The differences between their empirical evidence reflect the wide variety of appearances that valuation takes in contemporary society. They are anthropologists, economic or cultural sociologists, organization researchers, historians or political scientists. A number of chapters deals with aesthetic valuation, as in the tasting of a new vintage, or in the socio-technical process that shaped successful synthesizer sounds. Other chapters discuss the judgment processes in organizations, like architect offices or consultancy firms, and processes of evaluation and valorization in larger fields of practice, like accounting or mathematics. The studies are both of interest in their various professional fields, and contribute to a more general understanding of the social and cultural conditions under which innovations fail and succeed.

Ariane Berthoin Antal is senior fellow at the WZB Berlin Social Science Center, where she currently leads the research stream on "Artistic Interventions in Organizations" in the Research Unit "Cultural Sources of Newness." She is Distinguished Research Professor at Audencia Nantes School of Management in France and honorary professor at the Technical University of Berlin. She earned her B.A from Pomona College, her M.A from Boston University and Dr. phil from theTechnical University of Berlin. She has published widely in English, French and German on business and society, organizational learning and knowledge creation, and intercultural management, including the Oxford Handbook of Organizational Learning and Knowledge (with Meinolf Dierkes, John Child andIkujiro Nonaka). She serves on the editorial board of numerous journals, including Organization Studies, Management Learning, and Gender and Management. Michael Hutter is research director at the WZB Berlin Social Science Center, where he heads the unit "Cultural Sources of Newness." He earned a B.A. in mathematics at Portland State University, an M.A. in economics at the University of Washington in Germany and a doctorate at the University of Munich. From 1987-2008, he held the chair for economic theory at Witten/Herdecke University, and from 2008-13 he was research professor for knowledge and innovation at the Institute of Sociology atTechnische Universitat Berlin. He was invited as a visiting scholar at the Rockefeller Foundation, Bellagio (2000), the School of Information Management Systems, UC Berkeley (2002), and the Getty Research Institute (2003 and 2007). His publications include Beyond Price. Value in Economics, Culture and theArts (co-edited with David Throsby) and The Rise of the Joyful Economy (forthcoming).David Stark is Arthur Lehman Professor of Sociology and International Affairs at Columbia University where he directs the Center on Organizational Innovation. His book, The Sense of Dissonance: Accounts of Worth in Economic Life (Princeton University Press 2009) is an ethnographic account of how organizations and their members search for what is valuable. A recent essay on observation theory was published in Sociologica 2/2013, and articles in economic sociology appear in The American Journalof Sociology (2006 and 2010) and the American Sociological Review (2012) With photographer, Nancy Warner, he recently published This Place, These People: Life and Shadow on the Great Plains (Columbia University Press, 2013). Among other awards, Stark is the recipient of a Guggenheim Fellowship(2002) and an Honorary Doctorate from the Ecole normale superieure de Cachan (2013).