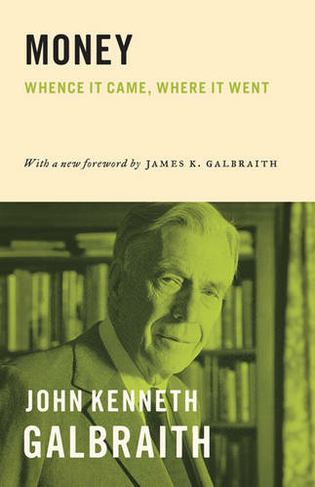 Money Whence It Came, Where It Went

Money is nothing more than what is commonly exchanged for goods or services, so why has understanding it become so complicated? In Money, renowned economist John Kenneth Galbraith cuts through the confusions surrounding the subject to present a compelling and accessible account of a topic that affects us all. He tells the fascinating story of money, the key factors that shaped its development, and the lessons that can be learned from its history. He describes the creation and evolution of monetary systems and explains how finance, credit, and banks work in the global economy. Galbraith also shows that, when it comes to money, nothing is truly new--least of all inflation and fraud.

John Kenneth Galbraith (1908-2006) was one of the most influential economists of the twentieth century. He was professor of economics at Harvard University and served as U.S. ambassador to India during the Kennedy administration. He wrote more than fifty books, including American Capitalism, The Affluent Society, and The New Industrial State (Princeton).