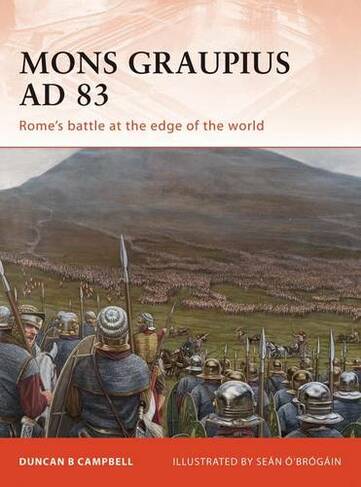 By Duncan B. Campbell (Author), Sean O'Brogain (Illustrator)
Paperback
https://www.whsmith.co.uk/products/mons-graupius-ad-83-romes-battle-at-the-edge-of-the-world-campaign-no-224/duncan-b-campbell/sean-obrogain/paperback/9781846039263-01-000.html £14.71 rrp £15.99 Save £1.28 (8%)
GBP
Availability
Currently unavailable. We don't know when or if this item will be back in stock
Free Saver Delivery on orders over £20
Details
FREE SHIPPING over £20 for Saver Delivery
Share

In AD 77, Roman forces under Agricola marched into the northern reaches of Britain in an attempt to pacify the Caledonian tribesman. For seven years, the Romans marched and battled across what is now Scotland. Finally, in AD 83, they fought the final battle at Mons Graupius where 10,000 Caledonians were slaughtered from only 360 Roman dead. It proved the high-water mark of Roman power in Britain. Following unrest elsewhere in the empire, the north of Scotland was abandoned and Rome's forces began their long retreat. Never again would Roman arms stand on the edge of the known world. ill

Dr Duncan B Campbell is a specialist in ancient Greek and Roman warfare. He published his first paper in 1984, as an undergraduate at Glasgow University, and produced a complete re-assessment of Roman siegecraft for his Ph.D. His work has appeared in several international journals. He lives near the Antonine Wall in Scotland with his wife and son. The author lives in Scotland.