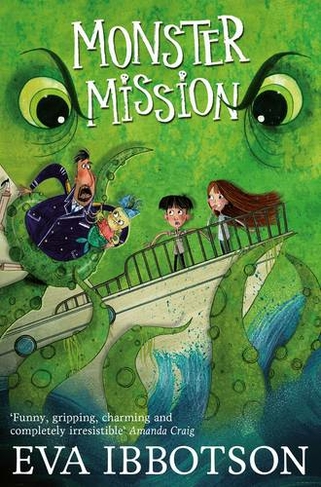 Monster Mission by Eva Ibbotson is a fun fantasy adventure full of fantastical creatures and mythical monsters! 'We must kidnap some children,' announced Aunt Etta. 'Young, strong ones. It will be dangerous, but it must be done.' Three children are stolen and taken to a bizarre island, which is home to some extraordinary creatures - including mermaids, selkies and the legendary kraken. The island is the base for a very mysterious mission. But the magical adventure is cut short when the island is suddenly under siege. Can the children save themselves and their new friends? 'Funny, gripping, charming and completely irresistible' - Amanda Craig

Eva Ibbotson was born in Vienna, but when the Nazis came to power her family fled to England and she was sent to boarding school. She became a writer while bringing up her four children, and her bestselling novels have been published around the world. Journey to the River Sea won the Nestle Gold Award and was shortlisted for the Carnegie Medal, the Whitbread Children's Book of the Year and the Guardian Children's Fiction Prize. Some of her other young fiction titles include The Secret of Platform 13, Which Witch? and The Great Ghost Rescue. Eva died peacefully in October 2010 at the age of eighty-five.