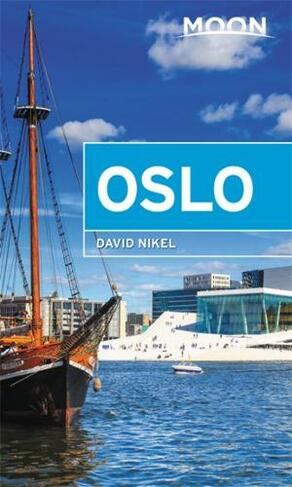 By David Nikel (Author)
Paperback
https://www.whsmith.co.uk/products/moon-oslo-second-edition/david-nikel/paperback/9781640490598-12-000.html £8.19 rrp £9.99 Save £1.80 (18%)
GBP
Availability
In Stock
Free Delivery Available When You Spend £25 Or More
Details
Spend £25 on eligible products to receive free standard delivery to home or free next working day click and collect to store
Share

One of Europe's fastest growing cities, Oslo is brimming with art, culture, and outdoor adventure. Discover the best of Norway's colourful capital with Moon Oslo. Inside you'll find: *A range of flexible itineraries, from three days in the city to island-hopping in the Oslofjord, plus day trips to Frederikstad and Lillehammer *Strategic advice designed for history buffs, nightlife-seekers, foodies, and more *Unique experiences and can't-miss sights: Visit the waterfront opera house, National Gallery, or Royal Palace for a taste of Norwegian culture, or tour the Viking Ship Museum to explore the country's ancient past. Wander the Akerselva Riverwalk, sample some of Oslo's delicious traditional foods, or splurge on seasonal Scandinavian delights at one of the city's four Michelin-starred restaurants. Go island-hopping by sailboat, explore skerries, lighthouses, and quaint fjordside towns, or take the metro to the cross-country ski trails surrounding the city *Expert advice from expat-turned-local David Nikel on when to go, where to stay, and how to get around *Full-colour photos and detailed maps for exploring on your own *Thorough background information on the landscape, history, and culture *Handy tools including a Norwegian phrasebook and tips for visitors with disabilities, business travelers, and more With Moon Oslo's practical tips and local insight on the best things to do and see, you can plan your trip your way. Exploring beyond the city? Try Moon Norway. For more Nordic adventures, check out Moon Iceland or Moon Reykjavik.

Originally from Northampton, England, David Nikelhas lived in Norway since 2011. He moved to Oslo in pursuit of riches in the ICT industry, but was quickly inspired by the magnificent fjords, dramatic mountains and dancing northern lights to start writing. He hasn't looked back since.David now travels the country helping Norwegian professionals master the English language, and as a result sees more of the country than most natives do. On these travels he met his Mexican partner and they have made a third-culture home together in Trondheim, the former Viking capital of Norway, speaking a confusing mixture of English, Norwegian and Spanish.To keep track of his adventures, David publishes two blogs about expat life and travel in Norway, and has written regular columns for the Telegraph and theNorwegian American newspapers. He also contributed destination features for the magazines of British Airways, Norwegian Air, airBaltic and Finnair.As much as he enjoys life in Norway, he hasn't yet fully assimilated. His attempts at cross-country skiing resemble a spider on roller-skates, much to the enjoyment of his new Norwegian friends.