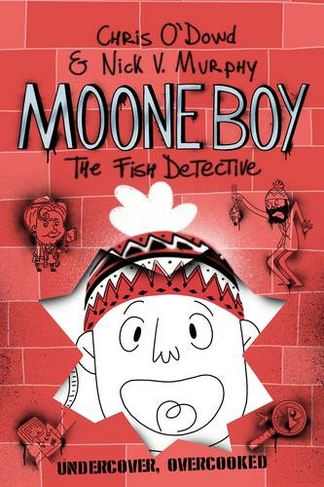 Successful film and TV star Chris O' Dowd collaborates with friend and fellow screenwriter Nick Vincent Murphy on Moone Boy 2: The Fish Detective, the second in this hilarious illustrated series inspired by the Sky TV series they co-wrote. Martin's parents are strapped for cash: it's going to be a budget Christmas this year. So Martin plans to buy his own presents - and attempts, unsuccessfully, to get a job. Padraic puts in a word for him with his Auntie Bridget, who runs the local butcher's shop. But her shop is struggling as the fish shop across the road undercuts her and Bridget just can't compete. No one knows how the owner, Francie Feeley, does it - especially since he doesn't seem to employ anyone at his fish factory. No one goes in; no one goes out - it's a mystery. Intrigued, Martin decides to go undercover and find out the truth, like a fish-mole - or fish detective. Martin infiltrates the factory and discovers that Francie is illegally employing a gang of Brazilian fish-gutters. They're a lot of fun and one of them, Fabio, becomes Martin's good friend. But when Martin is exposed as a spy, he has to choose which side he's on. Will Christmas be ruined for the whole of Boyle?

Chris O'Dowd is an award-winning actor, writer and director. He has appeared in many films, including Bridesmaids, The Sapphires and This Is 40. He has also starred in cult TV series The IT Crowd, Family Tree and Girls, and on Broadway in Of Mice and Men with James Franco. He writes, directs and stars in Moone Boy, the Sky TV series, on which he collaborates with his friend Nick Vincent Murphy. Chris is from Roscommon, Ireland, but is currently based in LA. He studied politics at Dublin University before training at LAMDA. Nick Vincent Murphy is an Irish screenwriter from Kilkenny, now based in LA. He studied English and History at Trinity College, Dublin, and did a Masters in Film Production at the Dublin Institute of Technology. In 2007 he was a writer on the acclaimed television comedy-drama series The Running Mate, and in 2010 his first feature film, Hideaways, premiered at the Tribeca Film Festival before going on to win the Melies d'Argent Award for Best European Film at the Strasbourg Film Festival. In 2010 he co-wrote a short film, Capturing Santa, with Chris O'Dowd, as part of the Little Crackers series for Sky, which they then developed into comedy series Moone Boy, winner of an International Emmy for Best Comedy.