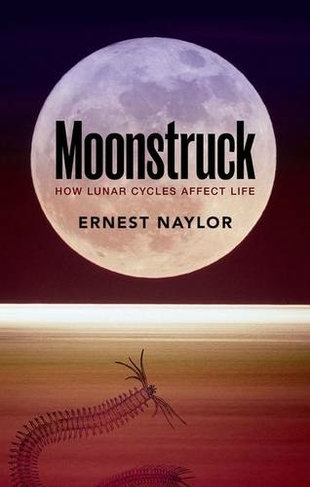 Throughout history, the influence of the full Moon on humans and animals has featured in folklore and myths. Yet it has become increasingly apparent that many organisms really are influenced indirectly, and in some cases directly, by the lunar cycle. Breeding behaviour among some marine animals has been demonstrated to be controlled by internal circalunar biological clocks, to the point where lunar-daily and lunar-monthly patterns of Moon-generated tides are embedded in their genes. Yet, intriguingly, Moon-related behaviours are also found in dry land and fresh water species living far beyond the influence of any tides. In Moonstruck, Ernest Naylor dismisses the myths concerning the influence of the Moon, but shows through a range of fascinating examples the remarkable real effects that we are now finding through science. He suggests that since the advent of evolution on Earth, which occurred shortly after the formation of the Moon, animals evolved adaptations to the lunar cycle, and considers whether, if Moon-clock genes occur in other animals, might they also exist in us?

Ernest Naylor is Professor Emeritus in the School of Ocean Sciences, Bangor University, where he was Lloyd Roberts Professor of Marine Zoology and Head of School of Ocean Sciences. He was a Founding Editor of the journal Estuarine, Coastal and Shelf Science and participated in reviews of scientific programmes in the UK, France, and the developing world. He was appointed OBE in 1998. His previous books include Chronobiology of Marine Organisms (CUP,2010) and British Marine Isopods (Academic Press, 1972).