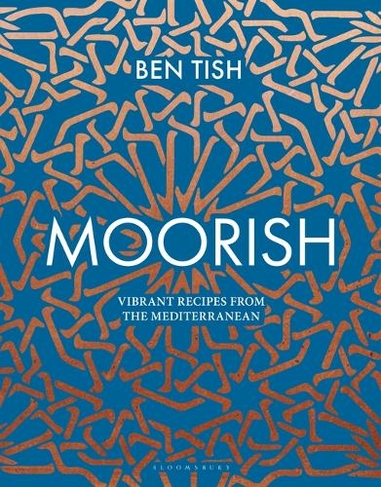 Moorish: Vibrant recipes from the Mediterranean

By Ben Tish (Author)
Hardback
https://www.whsmith.co.uk/products/moorish-vibrant-recipes-from-the-mediterranean/ben-tish/hardback/9781472958075-12-000.html £20.80 rrp £26.00 Save £5.20 (20%)
GBP
Availability
In Stock
Free Delivery Available When You Spend £25 Or More
Details
Spend £25 on eligible products to receive free standard delivery to home or free next working day click and collect to store
Share

Also available on eBook. Click here to purchase from Kobo.com
Fresh, fragrant, fruity, spicy, smoky, sweet, sour, and sharp. Discover how to cook these vibrant southern Mediterranean flavours at home with 100 wonderful recipes from Ben Tish. The bold spices and sun-soaked exotic tastes of North Africa and the Arabic world collided with the characterful food of the Mediterranean when the Moors invaded. It was this glorious fusion of flavours that first seduced British chef, writer and restaurateur, Ben Tish, and sent his cooking on a new course. Moorish is a collection of authentic recipes inspired by Ben's passion for the region, along with a few of his own twists and interpretations. He has divided the book into chapters based around the way he likes to cook at home - from quick and refreshing light bites and his notorious barbecue food to lazy brunches and slow-cooked dishes that fill the house with evocative scents of the Mediterranean. Specially commissioned colour photography throughout

Ben's love of food started at an early age in the seaside town of Skegness. Very busy parents meant that Ben spent a lot of time with his Jewish grandmother, a feeder if ever there was one and a brilliant home cook. At 19-years-old he moved to London to work as a 3rd commis chef at The Ritz, London. A baptism of fire ensued over the next two years followed by a move to the ultra cool restaurant Coast, where Ben worked with Jason Atherton and Stephen Terry. After working at a number of Michelin-starred restaurants Ben found himself at a high-end Italian restaurant in London's Mayfair which proved to be the turning point for his style. The kitchen's focus was on seasonality, with impeccable produce treated with the utmost respect. From there Ben then spent time at the remote Crinan Hotel in the West Highlands of Scotland where the supplier relationship was paramount and the only way to work was to be completely in tune with the seasons. Returning to London, Ben joined the Salt Yard group, which focused on the cuisines of Spain and Italy, serving tapas-style dishes with a modern spin. As Chef Director he went onto open several award-winning restaurants with the group.In 2018 Ben joined the Stafford London as their Culinary Director, overseeing all the food operations, and this year Ben will be leading on new restaurant projects with the Stafford, focusing on his love of Mediterranean cooking. This is Ben's third cookbook, having previously written Salt Yard Food and Wine (2012) and Grill, Smoke, BBQ (2016). He regularly appears on TV including shows such as Saturday Kitchen, Masterchef and Sunday Brunch. Ben lives in East London with his wife Nykeeta and his French bulldog Piglet.@ben_tish / chefbentish.com