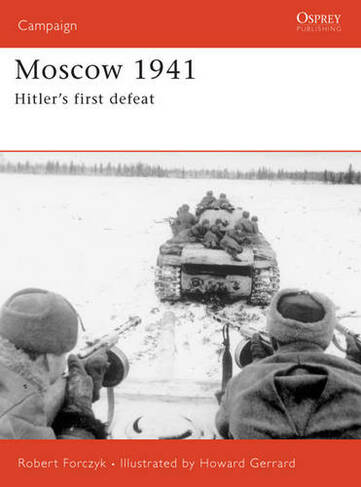 In late September 1941, the war in the east was approaching a climax. Since the beginning of the German invasion on 22 June 1941, Soviet forces had suffered the staggering loss of over 2 million troops. After inflicting a horrendous defeat on the Soviet armies at Kiev in early September, Hitler now re-directed the victorious Wehrmacht armies toward the heart of Soviet Russia: Moscow. Operation Typhoon began and in the first week of the offensive, the three German panzer armies surrounded virtually the bulk of the Soviet forces barring the way to Moscow. This title details the dramatic battle that took place right up to the suburbs of Moscow itself. Illustrations (some col.)

Dr Robert A Forczyk has a PhD in International Relations and National Security from the University of Maryland and a strong background in European and Asian military history. He is currently a lieutenant colonel in the US Army Reserves and has served 18 years as an armour officer in the US 2nd and 4th Infantry Divisions and an intelligence officer in the 29th Infantry Division (Light). He lives in Maryland, USA.