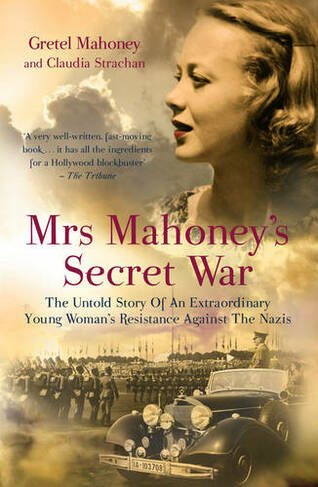 Mrs Mahoney's Secret War: The Untold Story of an Extraordinary Young Woman's Resistance Against the Nazis

By Claudia Strachan (Author)
Paperback
https://www.whsmith.co.uk/products/mrs-mahoneys-secret-war-the-untold-story-of-an-extraordinary-young-womans-resistance-against-the-naz/claudia-strachan/paperback/9781845965952-01-000.html £9.19 rrp £9.99 Save £0.80 (8%)
GBP
Availability
Currently unavailable. We don't know when or if this item will be back in stock
Share

Gretel helped to protect fugitives hunted by the Gestapo, hid her Jewish doctor in her cellar and passed to the resistance secrets learned from her work on the Enigma encryption machine. Finally arrested in 1945, she was liberated as the British Army advanced towards Hamburg. After the war, Gretel fell in love with a British officer. When he was transferred back to England, her determination and bravery were tested once more. 1 x 8pp b/w