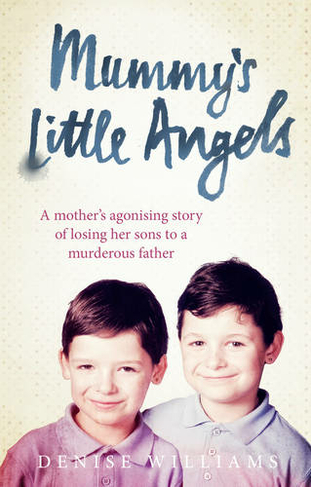 Mummy's Little Angels: A mother's agonising story of losing her sons to a murderous father

Losing a child is a mother's worst nightmare, but when you lose two children - your innocent sons - at the hands of the man they should have trusted the most, it's almost unimaginable. For Denise Williams this was her reality - her very real nightmare. In her harrowing yet inspiring memoir, she tells her personal story of falling under the spell of her control-freak husband, suffering a decade of domestic violence, finding the strength to leave and then his despicable act of revenge. Denise endured agonising grief and heavy guilt, but she has slowly rebuilt her life without her beautiful boys - learning to live, love and trust again. This is her heartbreaking memoir.

Denise WilliamsDenise has endured every mother's worst nightmare. Her husband murdered their two sons, aged seven and eight, in a despicable act of revenge when she told him she was ending their abusive marriage.Incredibly, Denise has rebuilt her life. She is now happily remarried and lives with her three young children in Birmingham, where she works as an insurance administrator.Denise would like to tell her story to help other women recognise the signs of control and abuse, and leave before it's too late. She strongly feels she is a survivor, not a victim.Julie McCaffreyJulie's journalism career spans 17 years and includes five years as a staff writer for the Daily Mirror.Her wide-ranging portfolio includes interviewing two prime ministers, going undercover to expose television auditions and swingers' clubs, filing celebrity interviews from Los Angeles and moving pieces from Camp Bastion in Afghanistan, where she was the first journalist permitted full access to the field hospital.After the birth of her triplet girls in 2009, Julie became freelance and relocated from London to Kinross in Scotland. Since then Julie has written celebrity and real life features for the Daily Mail, Daily Mirror and Sunday Mirror, as well as magazines such as Fabulous, That's Life, Hello! and Now.