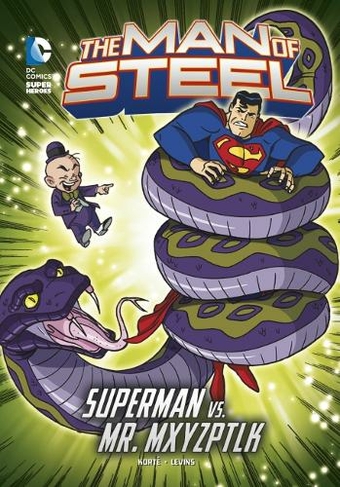 The Daily Planet reporter Clark Kent is having a bad day. Unfortunately, so is the rest of Metropolis. The evil imp Mister Mxyzpltlk is on the loose and causing magical mayhem throughout the city. To stop him, the Man of Steel will need a few tricks of his own.

Tim Levins is best known for his work on the Eisner Award-winning DC Comics series Batman: Gotham Adventures. Tim has illustrated other DC titles, such as Justice League Adventures, Batgirl, Metal Men, and Scooby Doo, and has also done work for Marvel Comics and Archie Comics. Tim enjoys life in Midland, Ontario, Canada, with his wife, son, dog, and two horses. Steve Korte is a freelance writer. At DC Comics he edited over 500 books. Among the titles he edited are "75 Years of DC Comics", winner of the 2011 Eisner Award, and "Jack Cole and Plastic Man", winner of the 2002 Harvey Award. He lives in New York City with his own super-cat Duke.