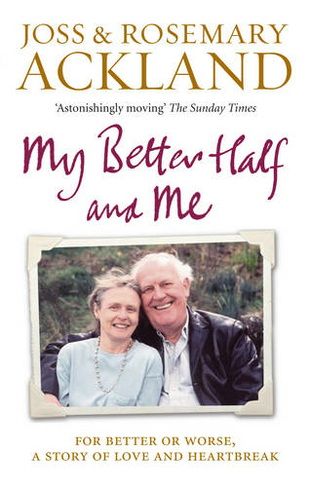 My Better Half and Me

Rosemary Ackland began writing her diary in 1945, aged just fifteen. For the next fifty-eight years, through happiness and heartache, she continued to write. Even after the tragic onset of Motor Neurone disease, which left her mute and immobile, her diary was still an outlet - in fact, then more than ever. Her simple, heartfelt jottings were never intended for an audience. But, during her last days, as he helped her hold a pen, her husband Joss read her words for the first time. Deeply moved by her lifetime's recollections he asked her consent to publish them and she agreed. My Better Half and Me weaves together Rosemary's diaries with Joss's commentary to tell of an extraordinary love story that lasted over fifty years. Their life together was remarkably full. At first they lived on a shoestring, struggling to bring up their new family on just Joss's payas a young actor. Once his career took off their lives became a dynamic whirl of tours across the country. But they remained an extremely close-knit family, with lives shaped by their seven children, by the tragic, untimely death of their eldest son, and later, by the birth of their grandchildren. Above all, this intimate and candid story, shows how lucky they were to have each other. In turbulent times they were each other's rock. Theirs was truly and old-fashioned romance.

Joss Ackland CBE was born in 1928 in London. Trained as an actor, he has appeared in more than 130 films, and countless theatre, alongside such luminaries as Dame Judi Dench, Ingrid Bergman and Lauren Bacall. However, his first priority was always his wife Rosemary, and now their seven children and 33 grandchildren.

My Better Half and Me
My Better Half and Me
Joss Ackland
Paperback
Special Order item not currently available. We'll try and order for you
https://www.whsmith.co.uk/products/my-better-half-and-me/joss-ackland/rosemary-ackland/paperback/9780091933470.html £11.95 rrp £12.99 Save £1.04 (8%)
GBP